Chelona's Rise is a Location in Elden Ring. The Chelona's Rise is found at the Moonlight Altar plateau, high above in the southwest of Liurnia of the Lakes. The Moonlight Altar is accessible only after making significant progress in Ranni's questline, up to the point where you defeat Astel, Naturalborn of the Void in the Grand Cloister and gain access to the lift in the Deep Ainsel Well, which leads up to the plateau. Players can reach Chelona's Rise by traveling south from the Ringleader's Evergaol.

Chelona's Rise's is situated on the southwestern-most tip of the Moonlight Altar sub-region in Liurnia. [Elden Ring Map Link]. 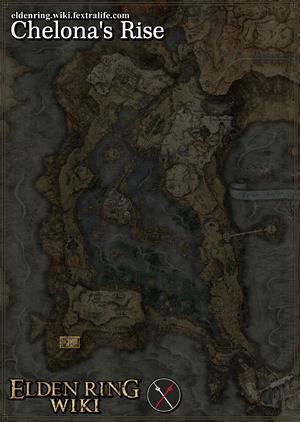 All NPCs and Merchants in Chelona's Rise

Along the long stretch of land between Ringleader's Evergaol and Chelona's Rise, you will find a path laden with crystals and several non-boss variants of Crystalians guarding the area. Past this pathway is a large open field with three gazebos by the cliffs. There is a Lesser Red Wolf of Radagon to be fought here which drops

4518 Runes upon death and does not respawn. Check each gazebo to find a total of 6 Smithing Stone (7) and 3 Smithing Stone (8). Chelona's Rise is found further south from the gazebos.

Chelona's Rise, like most field towers is sealed by a barrier upon initial visit. There is an Imp Statue by the entrance holding a glowing book, asking you to "seek three great wise beasts". The Great Wise Beasts in question are Giant Ghostly Turtles that you will need to search for and attack. Unlike most towers, the locations for these are spread very far apart on this entire plateau.

Important: Do NOT fast travel or rest at a site of grace while looking for the turtles or the turtles you have not destroyed will despawn until you examine the statue again.

The first turtle can be found directly west of the tower, hanging by the cliff face.
Use a ranged attack or a melee skill with AoE to hit it. [Map Link]

The second turtle is found far to the east, south of Lunar Estate Ruins.
Head towards the edge of the plateau and look down to see the turtle sitting on a lower cliff. [Map Link]
Occasionally this turtle does not spawn and can potentially be skipped.

NOTE: To ensure the turtle spawns, make sure to start at the Altar South Site of Grace then move east. Fast traveling to other Sites of Grace in the area can cause the turtle to not spawn.

NOTE 2: If you can't see the turtle at the cliff, try to throw a AoE spell or item (even an arrow should work) where it should be. Then head to the third turtle. 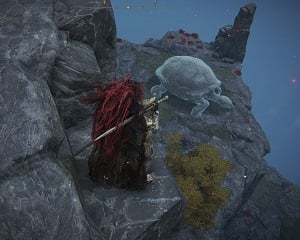 The final turtle is found southeast of Ringleader's Evergaol, flying high above. There is a Spiritspring nearby that you can jump from with Torrent, flying through the turtle while in the air. It's very obvious to see under the spiritspring, if you don't see the turtle, try going to Altar South, interacting with the imp statue book, then running to the Spiritspring. [Map Link]

NOTE: If you can't see the turtle midair, try jumping at the Spiritspring anyway. It may take some tries, but if you hit the right place where the turtle should be a message will show up saying that the tower is now open. 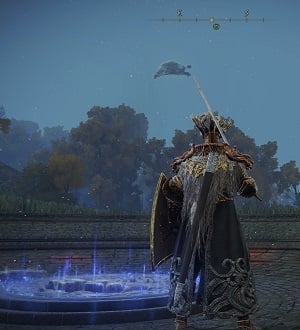 Once all three turtles are killed, you will be notified that the seal has unlocked. Make your way up the tower to find a chest with the Ranni's Dark Moon spell.

If you do use a site of grace to reach one of the turtles faster, it will not appear. However, you can make them visible again. To solve the Elden Ring Chelona's Rise turtles not spawning bug:

Go back to the tower and read the book again, then return to the location of the turtle without hopping across sites of grace.