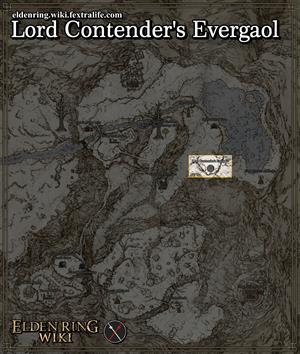 All NPCs and Merchants in Lord Contender's Evergaol

Like most Evergaols in Elden Ring, the area is also surrounded by Abnormal Stone Clusters. Upon activating the Evergaol, Roundtable Knight Vyke will spawn in the area.

This is a boss fight, and Vyke is also considered as an NPC, so he will be able to use a flask to heal, but he can only use it once. His attacks mostly deal lightning damage. Most of his strings are also interruptible, so try to bait him into attacking you and when he whiffs, try going in within range to attack. But do not strike him when you see him leap into the air and perform a plunge to the ground, you cannot interrupt him during this attack. Doing so may cost you your life, as it deals a lot of damage, and it will also stun you due to the whirlwind effect, and one more hit could immediately kill you. Best way to fight him is to stay on your right and keep dodging right, since he will keep his spear on his right hand and never two-hand the weapon.

He has two long range spells that he can utilize, the first one is called Fortissax’s Lightning Spear, where he summons two red lightning spears and throws them to the ground, that then spread in four different directions from where he is standing. The other one is Lightning Strike, you would need to pay attention to his hand, it will light up before he performs the attack, bolts of lightning will start striking in your direction. The best way to avoid this is to just run in one direction continuously until he stops the spell. He will also buff with Vyke's Dragonbolt, giving him lightning damage on his weapon.

Upon defeating Vyke, you will receive the incantation Vyke's Dragonbolt, as well as the Fingerprint Set.