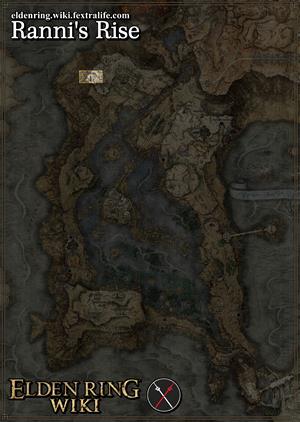 All NPCs and Merchants in Ranni's Rise

Ranni's Rise is found to the west of the Three Sisters sub-region. When first entering the area, you may come across Renna's Rise and Seluvis's Rise but these two are blocked by a magical seal, preventing entry. The only tower accessible initially is Ranni's Rise. Head into the tower and up to the first floor to find its Site of Grace. Look for a lift on this floor which will take you to the top of the tower where you will meet Ranni the Witch.

Ranni will ask for your servitude and will set you off on a quest to find the hidden treasure of Nokron. (If she refuses to give you the quest, try returning to the Roundtable Hold to speak to Rogier once more.) She asks that you speak to three other persons in her service: Blaidd, War Counselor Iji, and Preceptor Seluvis. These three NPCs will then appear on the first floor (in spectral form as their actual locations are elsewhere). A fog wall will surround Ranni's Rise, temporarily turning it into a safe zone. Speak to all three of the aforementioned NPCs. Iji will simply acknowledge that you are both now in service of the Lady, while Blaidd will ask you to meet him in Mistwood at the Siofra River Well. Seluvis will ask that you meet him at his tower in the south. Oblige and return upstairs to speak to Ranni, and she will tell you that she will go into a deep slumber. This will remove the fog wall. Lastly, head to Seluvis's Rise to acquire a task from him.