The Road's End Catacombs are on a pathway by the cliffs west of the southwestern Minor Erdtree in Liurnia. [Elden Ring Map Link] 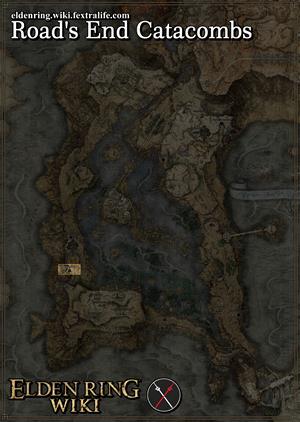 All NPCs and Merchants in Road's End Catacombs

Road's End Catacombs is a pretty straightforward dungeon with 7 Illusory Walls. As soon as you enter, you will find the Site of grace. Keep going, and after facing a few Fanged Imps, you will find a lever. Pull it, then keep going, facing the little resistance you will find.

You will find several Grave Glovewort (2) to grab. When you reach the end, you'll notice that there is not much to do. Hit the wall at the very end to reveal a secret door. Beware of the Fanged Imps that are hiding on the back of the wall as soon as you enter.

Loot the final chest at the end of the tunnel to obtain a new Spirit Ashes called Raya Lucaria Soldier Ashes.

As you are making your way back to the entrance, at the bottom of the two sets of stairs leading to the exit, hit the archway next to the stairs to reveal a secret door with some Fanged Imps and the Watchdog's staff and Grave Glovewort (3). Exit the hidden doorway and proceed up the first set of stairs. Once you are before the last set of stairs, head right and hit the second and fourth archway to reveal two secret doors. There is a single Fanged Imp as well as a Ghost Glovewort (2) and a Rune Arc to loot in the room on the left. Continue through the narrow path until you loot the Root Resin. Hit the wall in front of you to reveal another secret door. Keep going to obtain Grave Glovewort (2). Hit the wall to unveil ANOTHER secret door, which leads to a boss fight, the Spirit-Caller Snail. Defeat it to obtain the Glintstone Sorcerer Ashes and 3000 Runes.