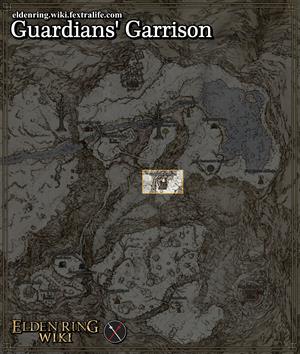 All NPCs and Merchants in Guardians' Garrison

From the White Ridge Road Site of Grace, you can make your way towards the Garrison, weaving through the wooden barricades. You can ignore most of the enemies here as they do not aggro unless very close. However, there is a Flame Monk guarding the main staircase into the garrison. You can run past him and fight him from atop the stairs where you have the higher ground. Inside the fort, head out the balcony and kill the Rotten Stray on the right. Check behind the crates on the opposite side for a corpse with a Golden Rune (10). Head back inside and take out the Rotten Stray near the camp and then engage the Flame Guardian. These guardians aren't overly difficult and they are highly susceptible to sorcery spells.

Go up the steps ahead and check the corpse by the brazier for 6x Smolderin' Butterfly. There are a couple of Rats in this area as well. Jump down the ledge opposite the corpse with the brazier and climb the ladder behind you to reach the upper floor. Follow the wooden walkway and head up the steps at the end to find another Flame Guardian. There is another one at the very end of this walkway. Check the corpse at the end for a Smithing Stone (7). Backtrack a bit and look for a broken section of the Garrison's walls where you can jump through onto a wooden platform outside. Follow this platform around the tower to reach the top floor of the garrison where you will find Chief Guardian Arghanthy waiting. In the tower to the left of the entrance to this platform, there is a pair of Strays. Deal with these before fighting the boss, or find a way to avoid them entirely.

Arghanthy is a very difficult opponent that uses some very advanced fire spells. His most dangerous one is a flame burst that he uses when players get too near, dealing massive damage at close range. He also has a long flamethrower spell that has decent tracking but can be sidestepped. Finally, when he plunges his hands into the ground, stay clear of the immediate area as flame pillars will burst forth from below. Consider using fire protective gear and consumables when fighting this opponent, as well as powerful Spirit Summons to distract him. Upon defeat, he will drop his One-Eyed Shield.

After defeating Arghanthy, head inside the tower he came out of in the southwest and climb up the ladder. At the top is a chest containing the Giant's Prayerbook.