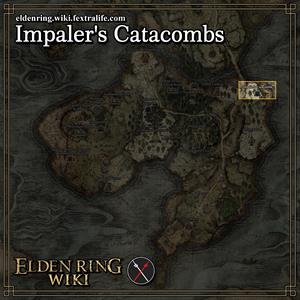 All NPCs and Merchants in Impaler's Catacombs

The Impaler's Catacombs is filled with Imps that crawl on the walls and jump at the player. When walking into new rooms you can slowly move your camera to check the walls around the entrance to look for enemies crawling on the wall to avoid being jumped in the back. The entrance can be easily found by following the cliffside on the eastern edge of Weeping Peninsula with a Site of Grace found inside at the top of the catacombs.

Heading into the Catacombs the first room players walk into is a square room with a large hole and stairs against the wall leading down. There are 2 Imps in this room, one on the wall of the entrance and one on the wall on the other end of the stairs. Avoid being pushed off into the hole while fighting them and continue to the next room where an ornate door flanked by 2 large stone statues can be found. The door is locked by some contraption but a path exists to the left for you to take. 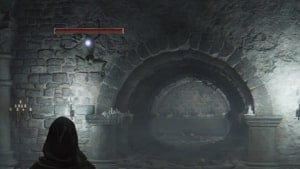 The catacombs are a series of tunnels and rooms connecting them, often with an imp on each wall where the tunnels connect to the rooms. The first room you enter will have 3 imps, one on the ground, one on the wall in front and one on the wall of the entrance you enter from. Watch out for the third one as it will jump at you from the wall if left unchecked. Past this room the path branches into 2, one to the right and down stairs, and one forward with a left turn. Go forward first to find a room with a single Imp and a Grave Glovewort [2].

Turning around and taking the path down the stairs leads to a large empty room, looking up players will notice a lot of spikes. Stepping on the floor will trigger the mechanism and raise the floor up pushing the player into the spikes dealing damage. In the room there is a pocket in the top left where a Grave Violet can be found. You can run across the raising floor and get to the pocket in time. If you stand on the floor for too long it will raise you all the way up into the spikes, then repeatedly push you into the spikes until dead or you make it back to the pocket.

It is not possible to get out directly by running to the exit as the floor will raise above the entrance keeping you in the room. To get out players have to engage the floor mechanism then stay in the pocket and let it reach the roof. Start moving to the entrance while the floor is descending back to the original position so that there is enough time to get out.

To complete this catacombs players will have to go to the room with the spike ceiling. At the entrance to the room step on the raising floor to have it raise up then quickly step back off and have it raise past you, fall down underneath the floor to go deeper. In this lower part of the Catacombs an infinite number corpses can be found raising up from the watery path. Following the pathway will lead to more rooms full of Putrid Corpses as well as a Prattling Pate "Please help". There are a set number of Putrid Corpses in each room, but a new replacement will stand up a few seconds after one is killed. At the end of the underground watery area there is a ladder leading upwards, at the top of the ladder is the lever that opens the doors at the start of the catacombs.

Watch out when turning the corner after leaving the lever, an imp is hiding around the corner ready to jump at players rounding the corner. Simply climb out of the window at the end to get back to the starting room.

This fight involves the boss as well as multiple Imps. The melee attacks of the Imps apply bleed and being surrounded by them while fighting the boss in this small room can quickly lead to the bleed threshold being reached and dealing large damage to the player. Clear out the imps before turning and focusing on the boss. This boss has around 1400 health but is slow and kiteable making for an easy fight once the imps are out of the way.

The boss has 2 modes of attack, one where they are standing and one where they are sitting, with only 1 attack in each mode that are both easily dodged.  While sitting the boss will jump or float up then move towards the player before dropping down with their attack in a small AOE, simply move away from the landing spot and continue to hurt the boss. When it is not sitting the boss will stand tall on their hind legs and walk towards the player, when they are near they will slam their sword down.

Defeating the boss will grant you Demi-Human Ashes as well as 2400 Runes.