Ringleader's Evergaol's is on the northwestern tip of the Moonlight Altar sub-region in southwest Liurnia. [Elden Ring Map Link]. 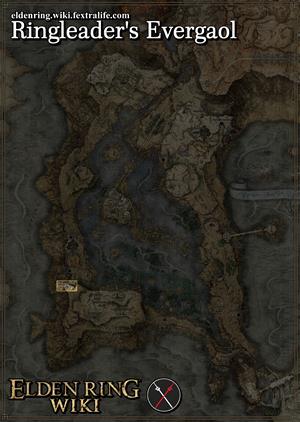 On the pathway towards Chelona's Rise:

This Evergaol does not require a Stonesword Key to unlock as the portal mechanism in the center is active as soon as you enter the area. Within, you can challenge Alecto, Black Knife Ringleader, a remarkably agile and aggressive assassin. Upon defeat, Alecto drops the Black Knife Tiche spirit ashes as well as 80,000

If you have inspected the statue's book outside of Chelona's Rise in the south, one of the three Giant Ghostly Turtles required to unlock the seal can be found flying high above in the east of the Evergaol.

Along the long stretch of land between Ringleader's Evergaol and Chelona's Rise, you will find a path laden with crystals and several non-boss variants of Crystalians guarding the area. Past this pathway is a large open field with three gazebos by the cliffs. There is a Lesser Red Wolf of Radagon to be fought here which drops 4,518