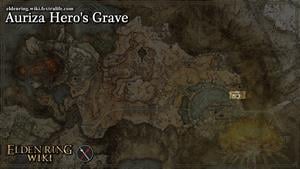 All NPCs and Merchants in Auriza Hero's Grave

Before heading here, make sure you have one Stonesword Key ready to use on an Imp statue. Upon arriving, you'll find the Site of Grace for this location. On the left side of an altar, you'll see an arch doorway that is blocked by a white fog. Use the Stonesword Key on the Imp Statue and inside that room, you'll encounter two Basilisk enemies. There's a corpse here that you can loot to find the Golden Epitaph weapon.

From the site of grace, head west where you'll need to traverse some slopes that head down to the lower section of this location. As you move towards the slope, a large environmental hazard, a Chariot, will appear. This isn't the only Chariot that will appear; there will be multiple ones as you progress.

On this first slope sprint down and about halfway, move to the alcove on the left or right to take cover. The alvcoves are located just past the third torch down.  There will be two Skeleton enemies that will reanimate when enter the alcove if you chose the one on the right. Wait for the Chariot to move past you and run all the way down till you reach the first set of pillars and arches. Stand directly under this arch for now.

Next, you'll have to go up a second slope. The two Chariots won't hit you if you're standing in between the pillars on the right or left side.

Wait for the second Chariot to go up, move up along with it to the flat top area and run into the far corner.

Run down the slope on the right side, ducking into cover as needed. Wait for the Chariot to pass then run and jump down into the gap on the right side. You will have to fight some Basilisks. Proceed through and you will come to the double wide slope. 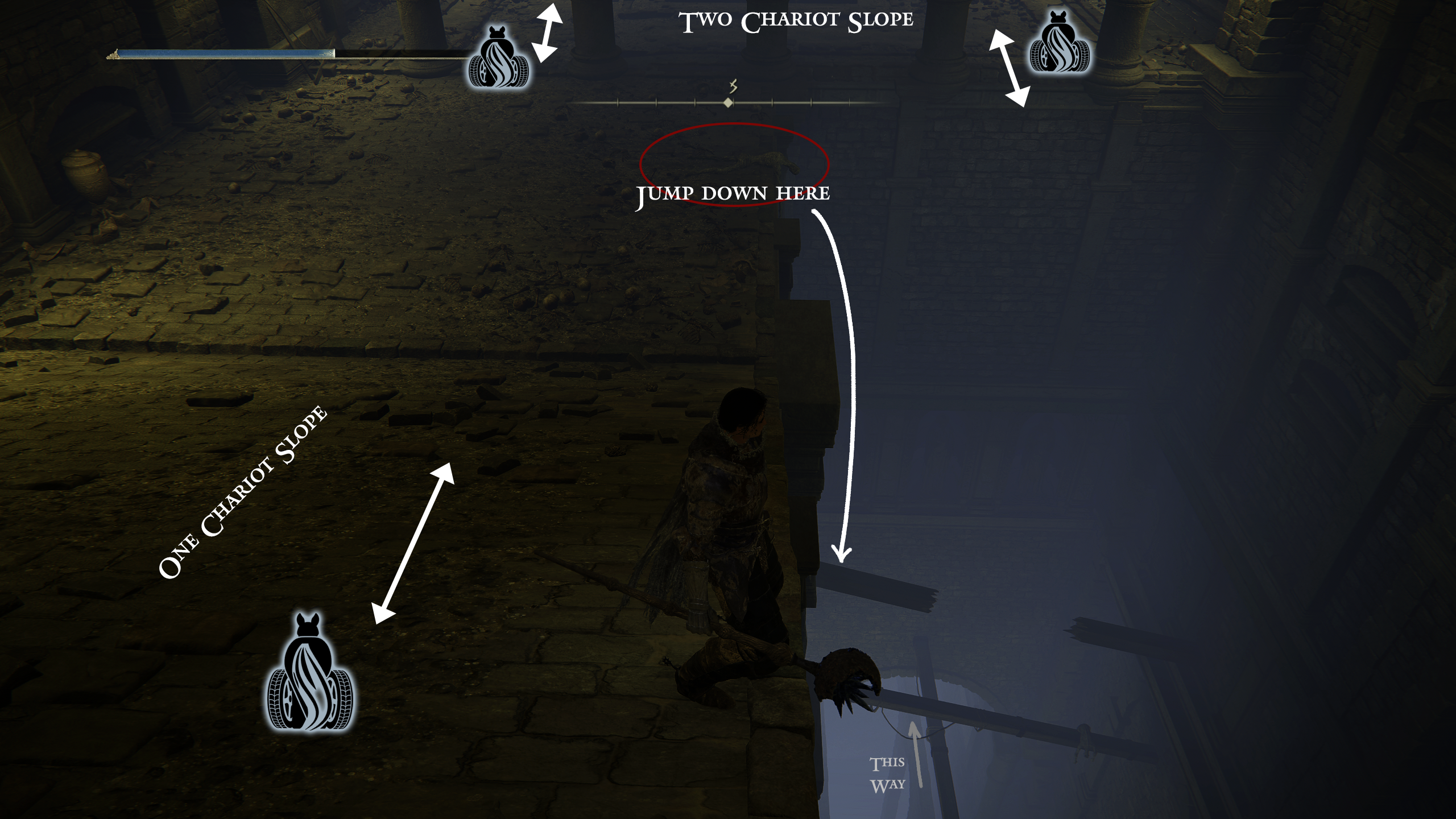 For the third slope, you'll notice that this slope is wide compared to the first two. There are two Chariots on the third slope that simultaneously moves up and down. Examine how both Chariots move so that you know which way to move.

In the middle of this large ramp, you'll notice that there is a gap that you can drop to. Use this to take cover. You'll find a body here that can be looted to find x1 Stonesword Key and x1 Ghost Glovewort [6] that is guarded by a single Skeleton enemy. As you continue heading down, if you need to take cover, just near the end of the slope, there's another alcove on the right side that you can use to take cover, but there's another Skeleton enemy here that will ambush you.

Make your way to the next row of pillars, sprinting in a zig-zag direction to dodge the chariots. Stand in between the pillars so that you won't get hit by the Chariot that will spawn ahead of you. Notice as well that there is a body hanging by the edge of the slope on the left, loot it to find x1 Golden Rune [7]. You should still be near the row of pillars.

Use the body as an indication of where to drop down. Before jumping, you'll notice the thin wooden plank structures over the large drop. This is is where you'll be dropping. Drop down the first short plank then onto the lower longer one directly underneath. Then you'll want to drop to the perpendicular plank and walk along it. You'll find the ashes here and another lower plank at the end perpendicular to the one you're on. Drop down one last time and make your way into the next area that it leads to. You should see a statue. Clear the toads in the area and you'll come across a corpse where you can loot Vulgar Militia Ashes. This area will also be filled with Basilisk Creatures.

Return to the wooden beams over the large drop. You should be able to drop down one more level onto a the narrow stone arches. Follow the narrow route all the way to the end. This area will have one large archway and a ladder. Ascend the ladder and you'll find yourself with another Chariot at the end of the tunnel. There's only one short slope left that goes up. You need to take cover by using the corner on the left side and then run up the slope to the right side into the chamber.

Collect the Grave Glovewort (6), then hit the fire-breathing pillar so that it's breathing fire out the way you came in. You can time things such that you can dive back into the safe spot on the left of the ramp without taking any damage, then race to the bottom of the path, and take out the Omen guarding the Crucible Feather Talisman. (If you die on the way, don't worry, you've already done the step you need to destroy the chariots. Return to the wide ramp with two chariots and watch the carnage unfold!) Take the elevator up from the branch in the path, and then navigate around the fire-breathing pillar that you've already raised. Collect the Grave Glovewort (6) and 3x Great Dragonfly Head on the way and drop into an alcove that's right next to the wide ramp with two chariots. You'll notice that raising the pillar has created a sigil that will summon a third chariot in this area causing the chariots to crash into each other, breaking and leaving you with Ash of War: Holy Ground and the Tree Sentinel Set. Go north further to open the door leading to the boss area. You are also free to explore the area without interruptions from this point forward.

(Alternate solution: As soon as you've reached one of the safe spots in the wide ramp with two chariots, use either Margit's Shackle or Mohg's Shackle. The range of these items can pass through walls, and it causes the fire-breathing pillar to be raised from your current location. This then places the summoning sigil right in the middle of this ramp, causing all three chariots to be destroyed and leaving you the freedom to explore the rest of the area without the tedium of navigating around the chariots.)

Beyond the door, simply head down the steps. This section is guarded by a few Skeleton enemies, it should be easy for you to fight and pass through them. At the bottom-section is a large archway that is covered with a gold mist. Beyond it serves as the arena for the bosses of this location, the Crucible Knight and Crucible Knight Ordovis. We suggest that when you are fighting them, to take out the spear-wielding Crucible Knight first and to use any of your upgraded or strong Spirit Ashes. This way, you won't have to fight the bosses on your own.

Successfully defeating them both yields 28000 Runes and rewards the Ordovis's Greatsword, as well as the Armor pieces for the Crucible Axe Set. There are some Root Resin materials that you can get in this boss arena - simply use the portal here to return to the entrance. 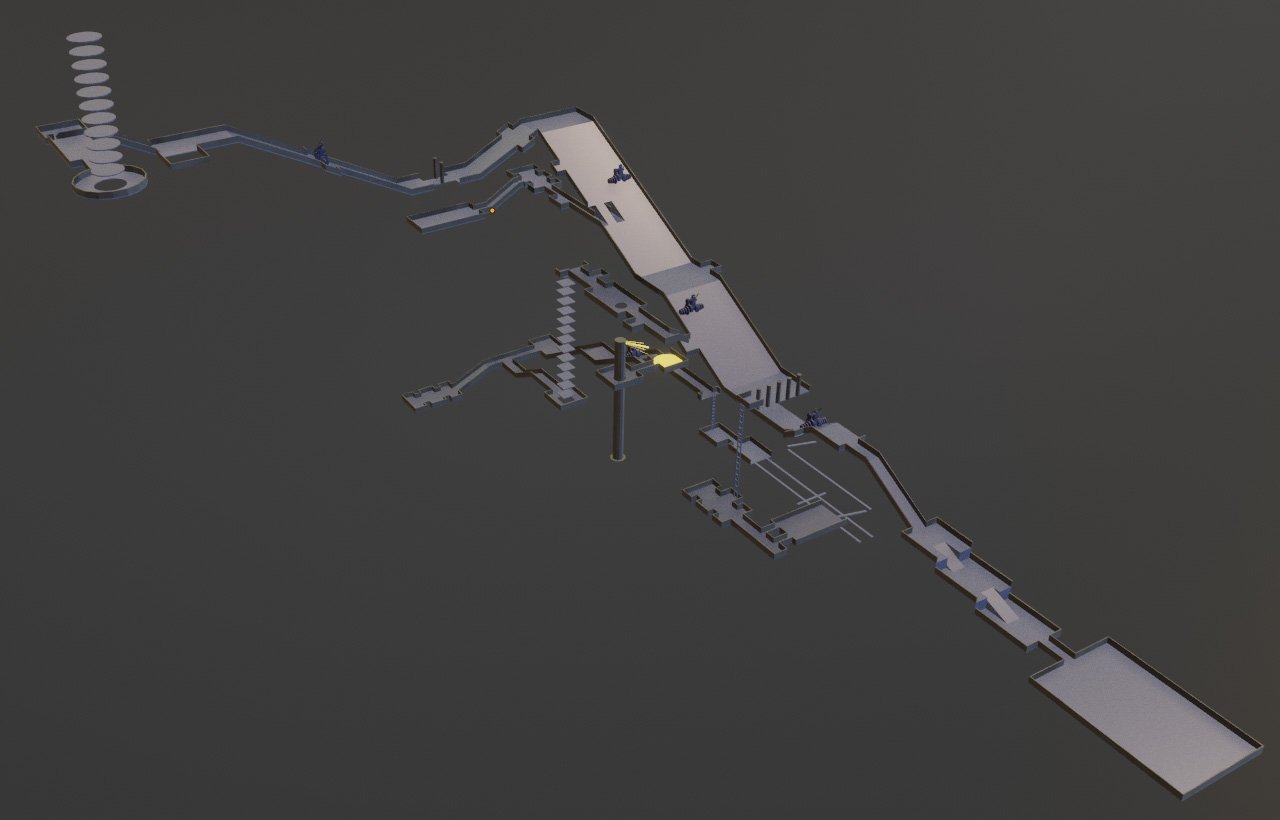