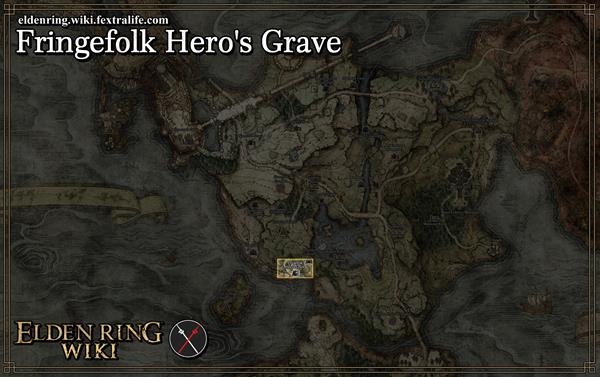 There are no upgrade materials.

When entering Fringefolk Hero's Grave, players will need to be ready with two Stonesword Keys. They can be found or purchased in multiple locations. For Stonesword Key locations check the page here. Bring them to the Stranded Graveyard.
It's also recommended to bring a bow and some arrows (you can buy cheap arrows at the merchant at the Church of Elleh).

Once obtained, examine the figure at the fog gate entrance of the Fringefolk Hero's Grave then use the Stonesword Keys. You can drop down without taking damage or use the ladder.
Dropping down will cause you to stagger, however, and make it easier to proc poison. Run through, do not roll as this will cause poison to stick on your armor and speeds up poison build-up.  Keep going until you reach solid ground again. Take a few steps and pause to wait for the Chariot to approach.

Once it approaches and leaves, run forward and use the gaps on the sides of the path to continue to avoid getting hit. Be prepared, some gaps will have enemies.

The easiest way to do the first stretch is to run as soon as the Chariot turns around at the top of the hill.
Follow it, past the first openings, straight to the second set of openings and stick to the left side. There will be an archer spawn that wont be ready for you. Kill him and wait for the Chariot to to climb back up, turn around and go down again. This time when it passes you immediately dart down to the opposite, third side opening. There will be another archer and an opening behind him. Be careful not to fall of the cliff yet. On your other side a swordsman will start charging you. If you've timed this right the Chariot should already be on its way back up and will kill him.

If you are planning to drop off the side of the ramp in the second stretch, you should move up to the edge where you can drop down out of this opening, and look towards the uphill end of the second ramp. On top of the wall at the end, you will be able to see a phantom, which will not become hostile until you reach that area. If you have a bow or other ranged attack which can reach him, you should shoot him now, which will cause him to drop down to the ramp level and head towards you. Before reaching you, he will be killed by the Chariot. Note: As of 3/28/22, the phantom can now teleport directly to you if you are hiding in one of the wall opening, so it may not be wise to lure him into such a tight space and you'll have to fight him while avoiding the chariot.

As the Chariot is going back up from where you came, dash out of the hole in the wall and immediately start running down.
There is a wall opening immediately before the narrow ramp section, so run down to that opening before attempting to do the following.
From here you will have three options: Run down the narrow ramp, drop off the left side of the narrow ramp, or drop off the right side.
If this is your first time going through and you want to clear everything, dropping down to the right will make this all much easier. 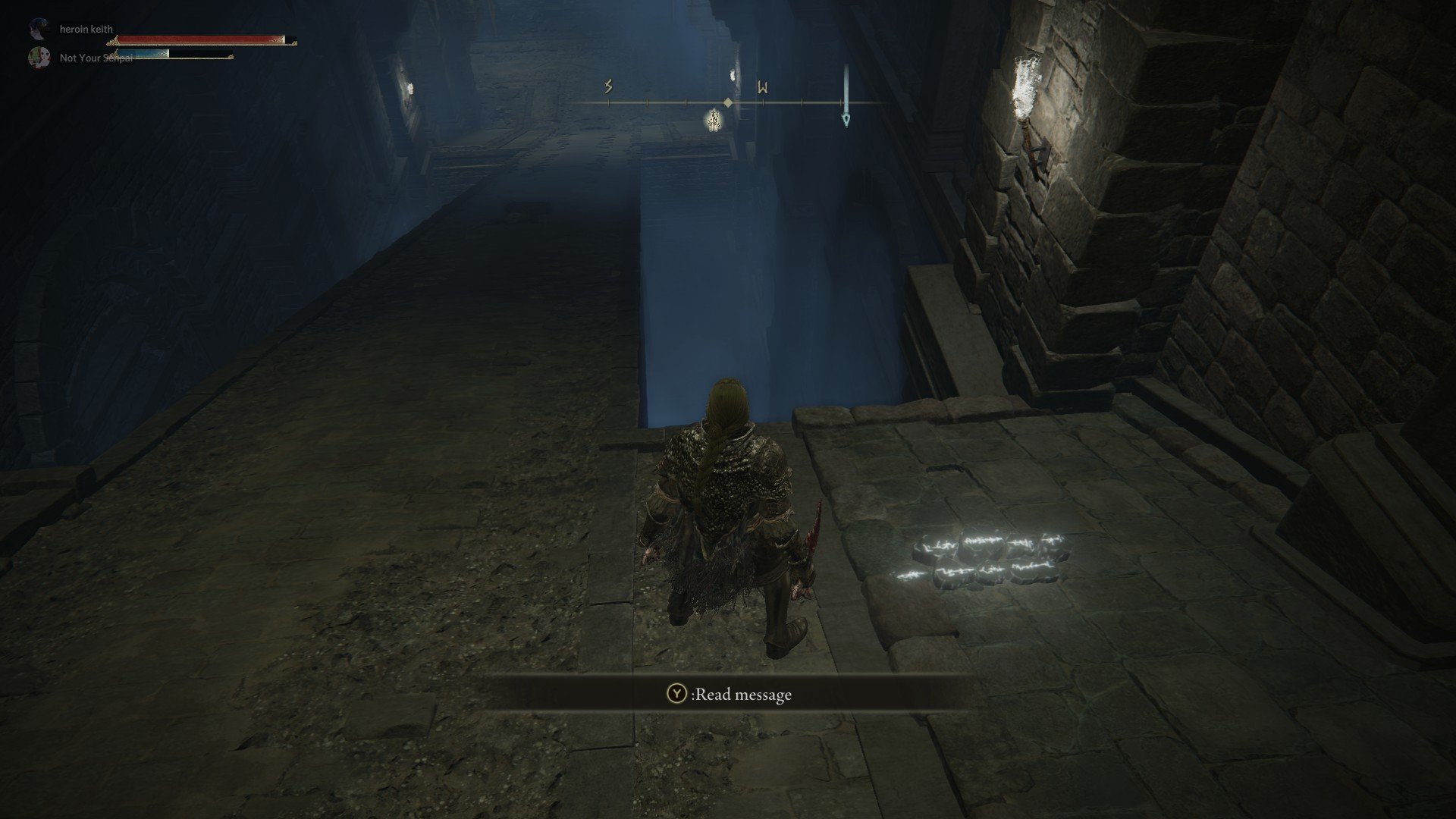 Dropping on the right: Standing at the top of the narrow ramp looking directly over the opening on the right, you can drop down to the ledge below. Walk off the ledge slowly, since you can drop past it and die if you're moving too fast. There will be a few Imps to take care of. When you drop down on the right, you will be standing behind the first imp and it might not notice you, allowing you to backstab it. After dealing with a second imp, continue down the hallway and down a set of stairs. Stop before reaching the bottom as there will be a pillar shooting flame towards you. Shoot the pillar with a bow and it will go down. Continue forward, being wary of the right opening with an Imp waiting to ambush you. If you go to the left of the pillar there will be an Imp with a strange polearm, he's not too different from the hatchet variation but his skill set can be unpredictable. But in the same room, an imp will jump down from the ceiling making it a little more difficult, if you want to be safe, lock on to the imp in the room then shoot it a couple of times with your bow, luring it to you, defeat him and proceed to defeat the other one jumping out at you. Defeating them grants access to a corpse with Lightning Grease. 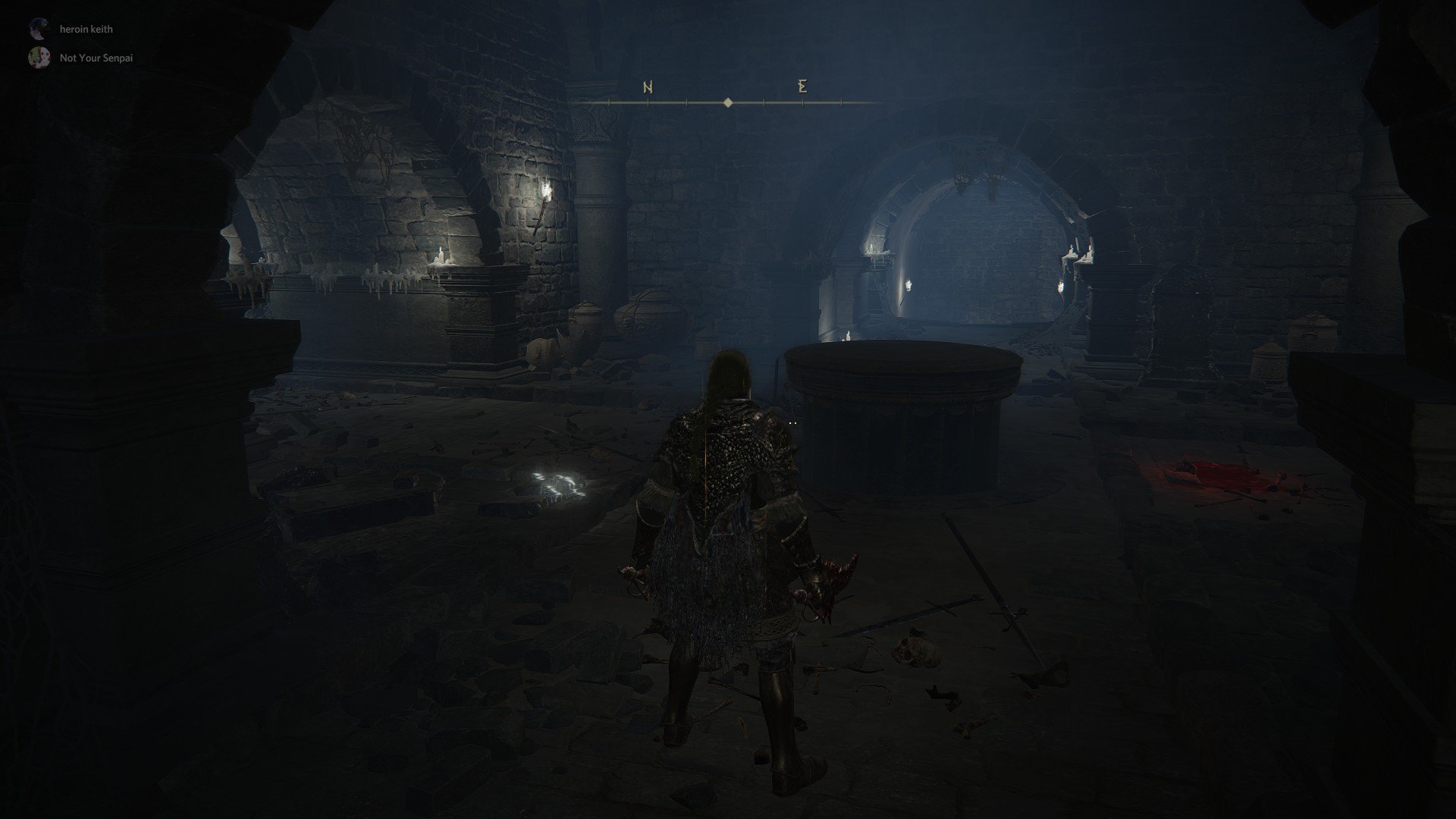 Take the route behind the pillar and you should come across an archway leading to a room with a large statue surrounded by candles. Directly above you will be a menacing,  Grafted Scion and another above the altar with the item. 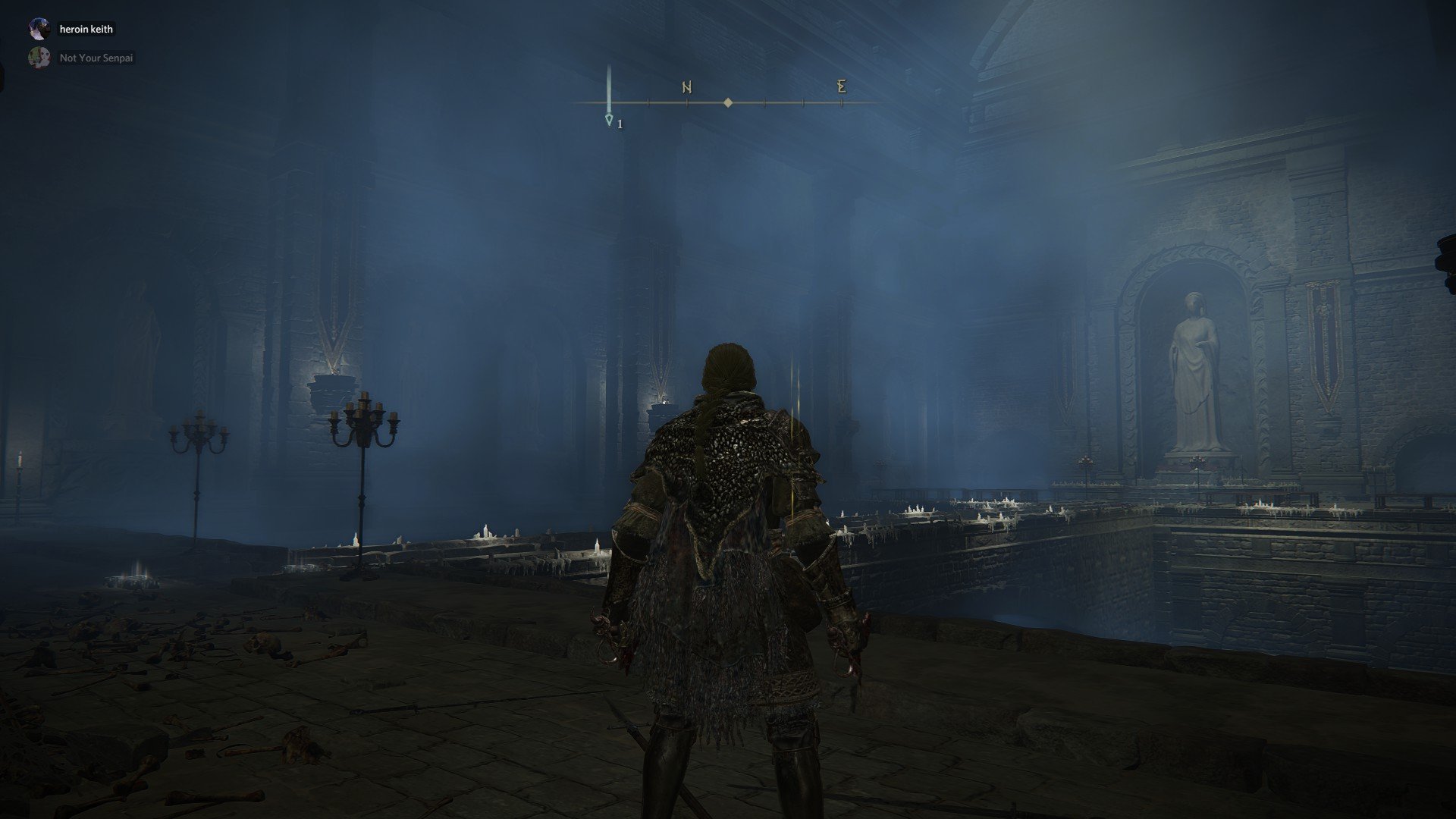 Then, make your way back to the entrance of this room and look down over the ledge where you originally entered. You should see another ledge. Drop down to the ledge, and then drop down again to the water below. It looks poisonous but it is not. 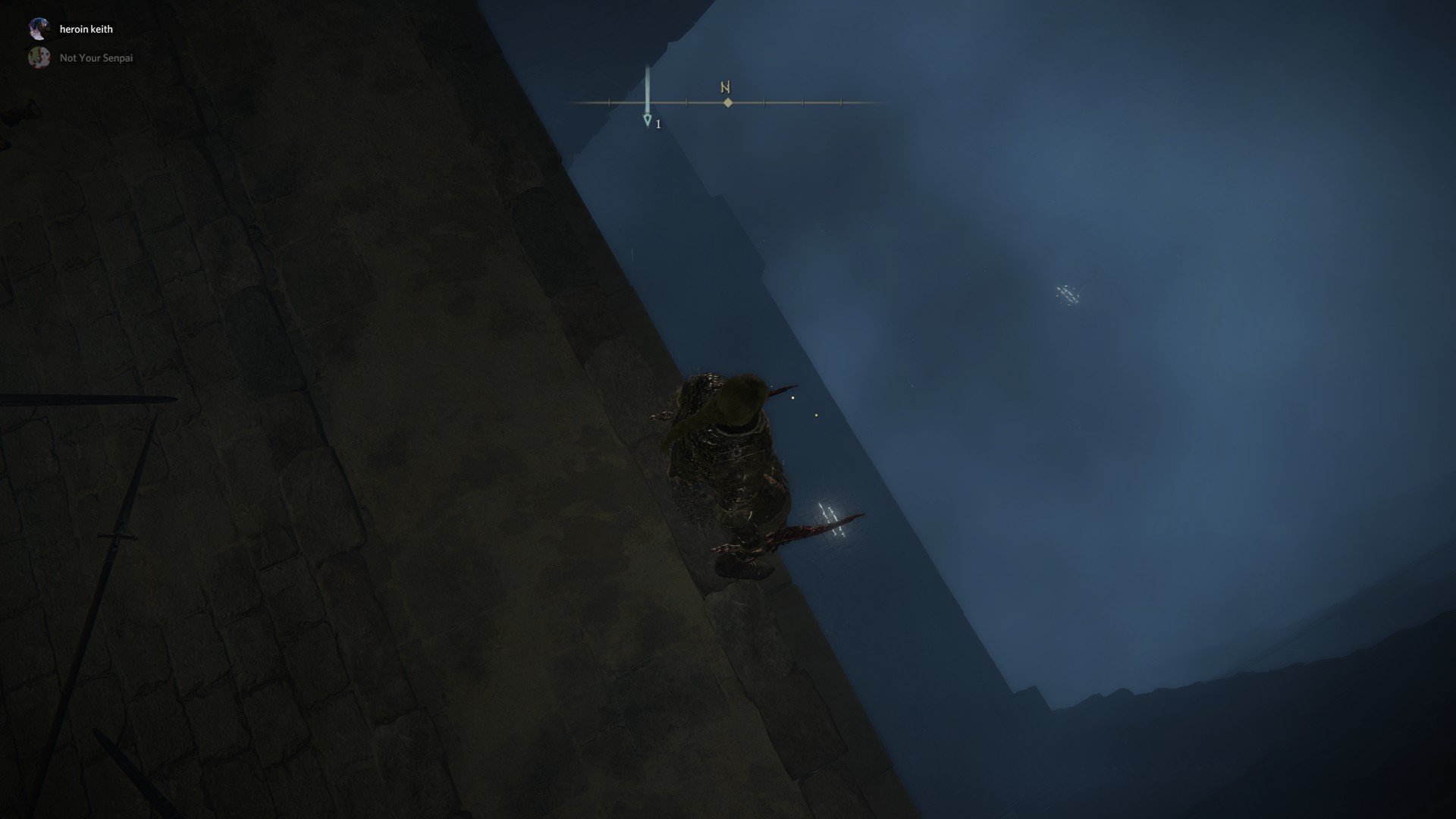 From the bottom, turn to find the opening leading up to an elevator. Take the elevator up and you'll now be on an outlook, over the Chariot. Immediately to your left will be another Castle Guard Phantom with a polearm, if you didn't previously bait him out into the chariot's path with a ranged attack. He appears simple but will use whirlwind attacks to pull you in and continuously spin in circles. This phantom is also immune to all status effects and can phase past your attacks to strike you from a different angle. 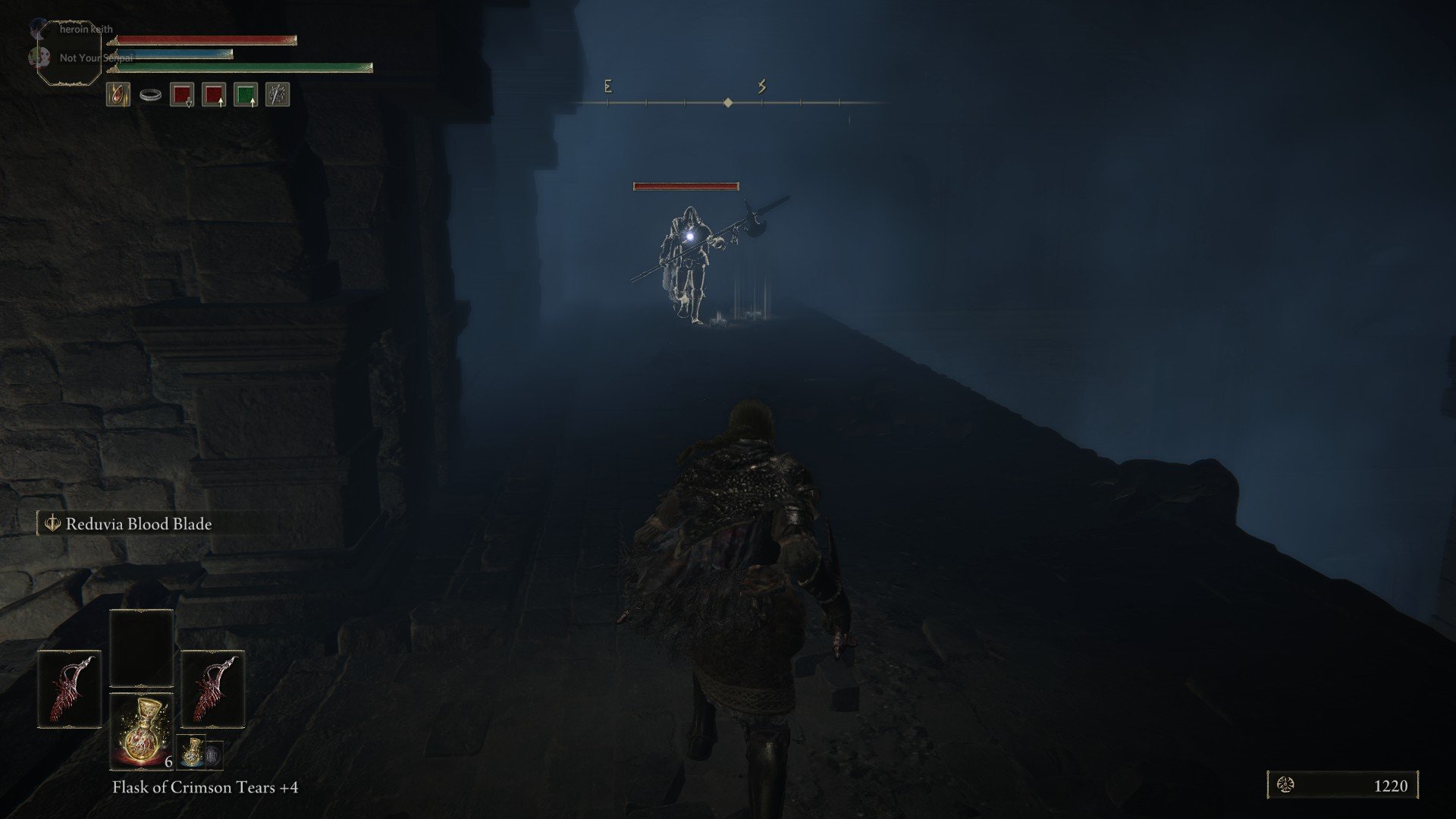 After you've defeated him walk to the south edge of this balcony and look to the ceiling. You'll see three pots suspended by ropes. Using a bow or crossbow, manually aim for these ropes. Fire the moment you hear the chariot loudly stop at the balcony below you, and the pot should fall onto the chariot and destroy it. You only need to land one pot to succeed. If you've missed all three times, the pots regenerate when you rest at a Site of Grace. 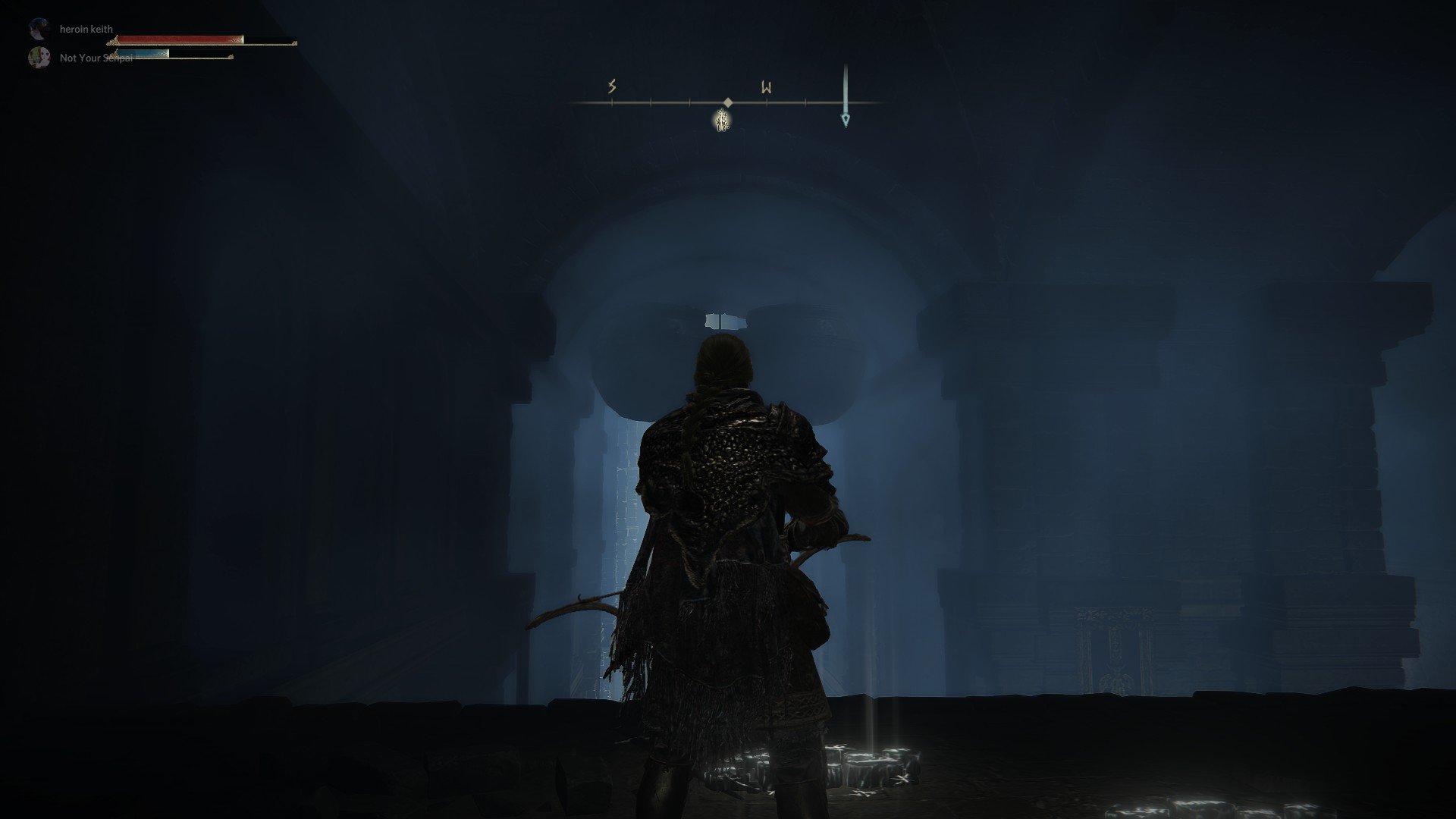 Destroying the Chariot not only makes progression much simpler, but also nets you the Erdtree Greatbow and some arrows. The Chariot will also now be gone permanently. From this ledge you can safely drop down below.
Move forward down the ramp and you'll be back at the narrow bridge, free to go wherever you please.

So you're back at the narrow ramp! From here you can simply walk down the ramp.

Dropping to the left of the ramp: This will simply give you a shortcut to the boss at the bottom and I imagine is great for speedrunners. (Note: If you haven't destroyed the chariot standing on this platform will act the same as standing on the narrow ramp. This means the chariot will still be stuck going up and down on the original pathway and wont follow you down until you get back on the ramp. Timing this right gives you a massive headstart toward the boss.) Following the ramp down will lead to the same area.

Assuming you're at the narrow ramp, run down it and take the left turn at the bottom. There will be one archer spawn on the left opening at the bottom of the narrow ramp.
From here you have the option to go left, leading you to the boss. Or right, which leads you up in another direction. Both should need little explaining and I'll assume the chariot is no longer around.
Going right/West takes you up a ramp, with four Castle Guard Phantom along the way.  At the top of the ramp is is a  ghost-soldier kneeling by the statue. 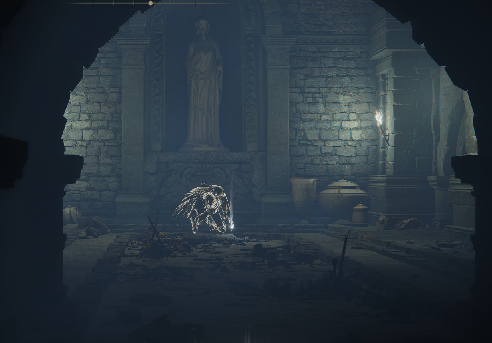 He has a shield, uses pyromancy and is very aggressive. Defeat him and he'll drop the Dragon Communion Seal. Behind the spot he was guarding, pick up Dragonwound Grease. Turn around and head back down.
Going left/North (or continuing down the ramp, after defeating the phantom for the Dragon Communion Seal) takes you past the spawn point of several ghost soldiers. It's fairly easy to run past them as they don't net many runes. Eventually you'll get to the boss room containing the Ulcerated Tree Spirit. Dropping a Golden Seed and Banished Knight Oleg Ashes.

While there is not a site of grace here there is a statue for respawning (Stake of Marika) just outside the fog wall. 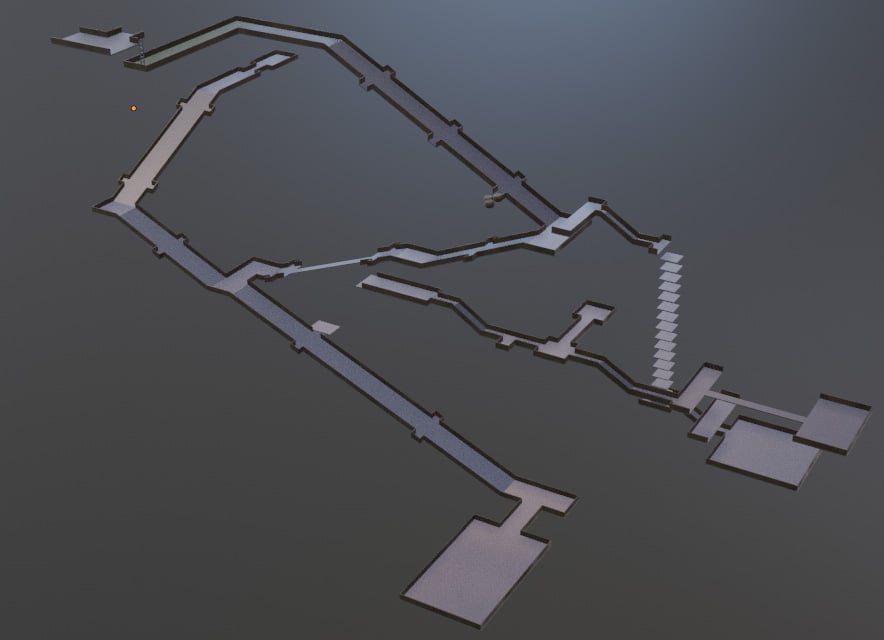