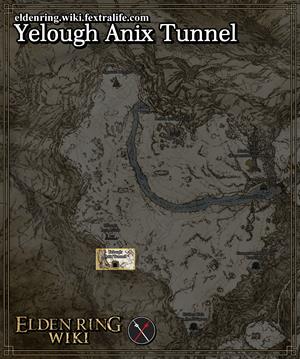 All NPCs and Merchants in Yelough Anix Tunnel

Upon entering the dungeon and descending the lift, activate the Site of Grace and then head down the tunnel ahead. You will see several dead Miners along the way. When you reach the cavern at the end, look to the left for a hole. The door in the north does not open from this side so drop down into the hole. Defeat the two Miners in the room and pick up the 3x Freezing Grease on the corpse in the middle of the frozen lift. There is 1x Smithing Stone (8) behind the frozen elevator.

Follow the path east to reach a cavern with wooden walkways. Defeat the Miners on this floor and check the corpse on the ice platform in the middle for a Golden Rune (10). Drop down into the gap in the center or use the ladder on the side. Look for a small opening on the right with two Miners and a corpse with a Rune Arc. Head to the other path where there is a gravity portal. A non-boss Alabaster Lord will emerge from it as you approach. After defeating him, check the cavity in the wall on the left for 2x Smithing Stone (8). Finally, check the back of the room for a corpse next to wooden planks on the wall for an Ancient Dragon Smithing Stone.

Head back up the ladder and using the ice platform in the center, jump the gap onto the opposite side and head through the opening in the wall. Kill the Miner sitting by the campfire and collect 6x Explosive Stone Clump from the corpse nearby as well as a Somber Smithing Stone (8) on the left side. Climb up the ladder and defeat the two Miners in the middle platform, then collect the Somber Smithing Stone (8) to the right of the ladder. Head up the second ladder and through the tunnel above.

In the next room is a gravity portal in the north. Before approaching it, check the cavity in the wall on the right for a Somber Smithing Stone (9). The corpse in the center of the room also has a Hero's Rune (5). Upon approaching the portal, a non-boss Onyx Lord will emerge and begin attacking. Be careful of his meteorite spell as the room has very little space for you to maneuver in. Once he's defeated, continue along to the west and find the small door on the left of the next room. This is the locked door from the beginning of the dungeon and serves as a shortcut for the boss ahead. Head through the large wooden gate to engage the dungeon's boss.

This boss has an extremely powerful Heavy Tail Whip that can one-shot even high level players. It has a distinct animation from his standard tail whip where he swings his tail from side to side before striking. It is important to time a dodge perfectly against this move even if you are very far away. The boss also has a railgun-like beam move that hits over a very long range but has a narrow hitbox. Periodically, he will teleport into a different location in the cavern but it's easy to tell where he is going to appear. Another dangerous move in his arsenal is his meteor swarm, which calls plenty of meteorites to rain destruction in the arena. You can run towards and under the boss to avoid getting hit by these. Despite his powerful moveset, the boss' poise is quite easily broken, especially by multi-hit magic spells and skills. When he is knocked down, get to his head for a critical hit on his forehead.

Upon defeat, Astel will drop the Meteorite of Astel spell.