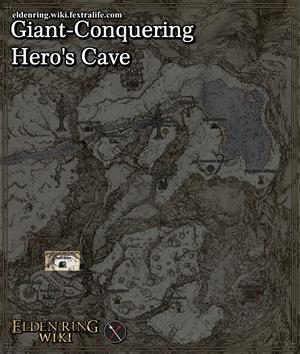 All NPCs and Merchants in Giant-Conquering Hero's Grave

The Giant-Conquering Hero's Grave is found just northeast of the Zamor Ruins. However, it is high atop a plateau and reaching it will require some legwork and circling around most of the region's northeastern sections. Ride past the ruins and around the lower cliffs of the plateau towards the east until you reach a very narrow pathway/bridge heading northeast. Cross this treacherous path and continue heading northeast through the valley between Stargazers' Ruins and the Minor Erdtree. You should reach the narrow river section of the Freezing Lake shortly.

Continue northeast until you reach the Freezing Lake site of grace and then head southeast, keeping close to the western edge of the lake. Once you are able to get up the hill in the west, follow it down to the Guardians' Garrison in the southwest. From here, head south and cross the giant chain bridge to find the Giants' Gravepost site of grace. From here, ride southwest, keeping close to the cliff edges and watching out for Fingercreepers littering the area. At the end of the path, there should be a small gap you can jump across to finally get to the plateau where the Hero's Grave can be accessed. Watch out for the large Fingercreeper that pops out from the gap as you approach.

Note: This Dungeon is similar to others in that enemies (Several Imps, as well as an Lesser Burial Watchdog) will appear in dark, ghost forms. They cannot be damaged, staggered, or affected until they step on the golden floor seal ('the light'). The Imps and Watchdog will be staggered as they touch the Seal and lose their invulnerability.

Stepping down from the elevator inside the Catacombs, players will immediately find a Site of Grace to use. Heading into the catacombs from the Site of Grace players will see a room sealed by an imp statue. You can choose to use a Stonesword Key here to open the seal for a Flame, Protect me incantation within. On the left (coming from the site of grace) is a pathway to another area. 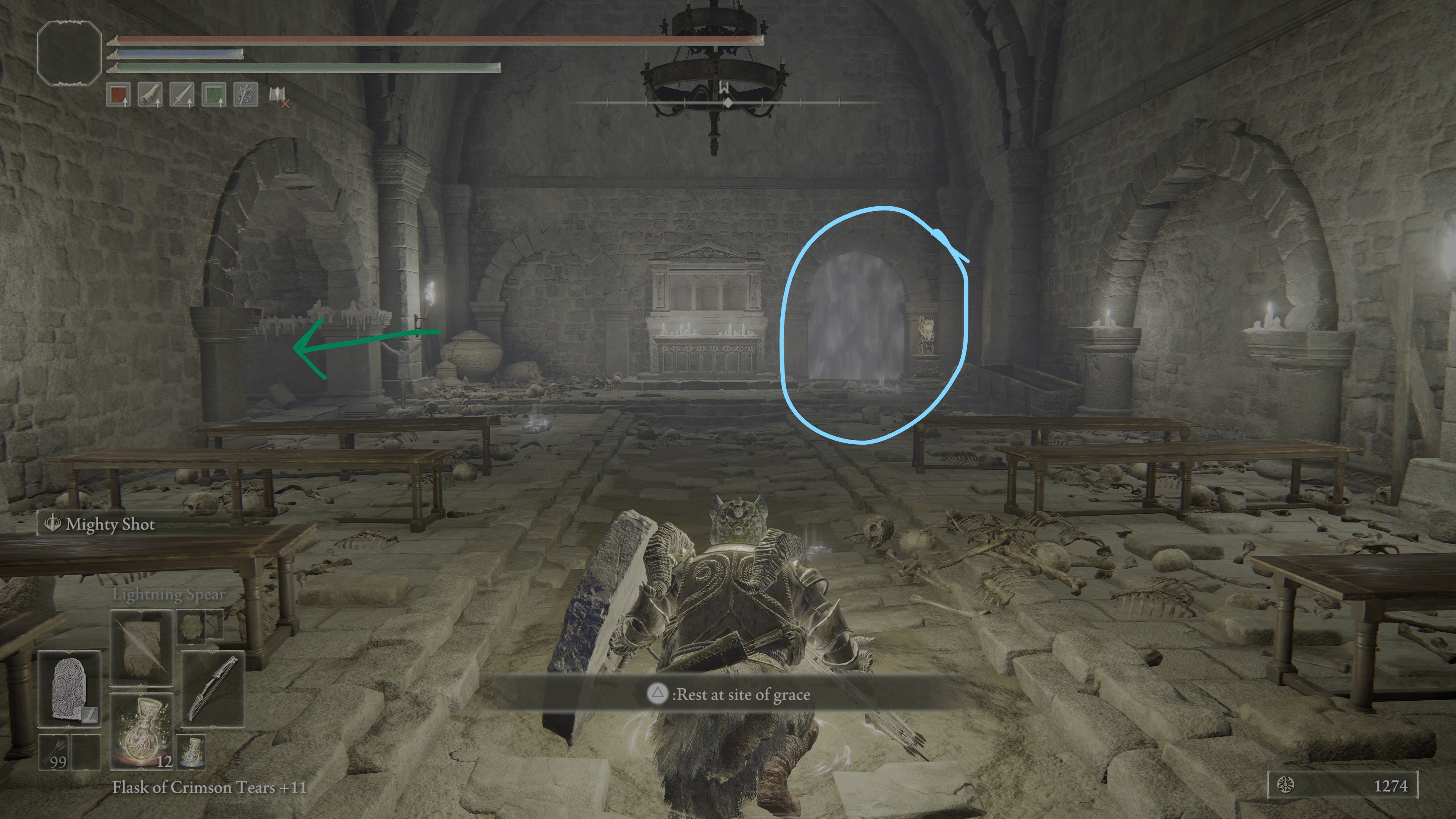 Proceed down this route, and your pathway will intersect with a perpendicular pathway where a Fire Monk is patrolling back and forth. 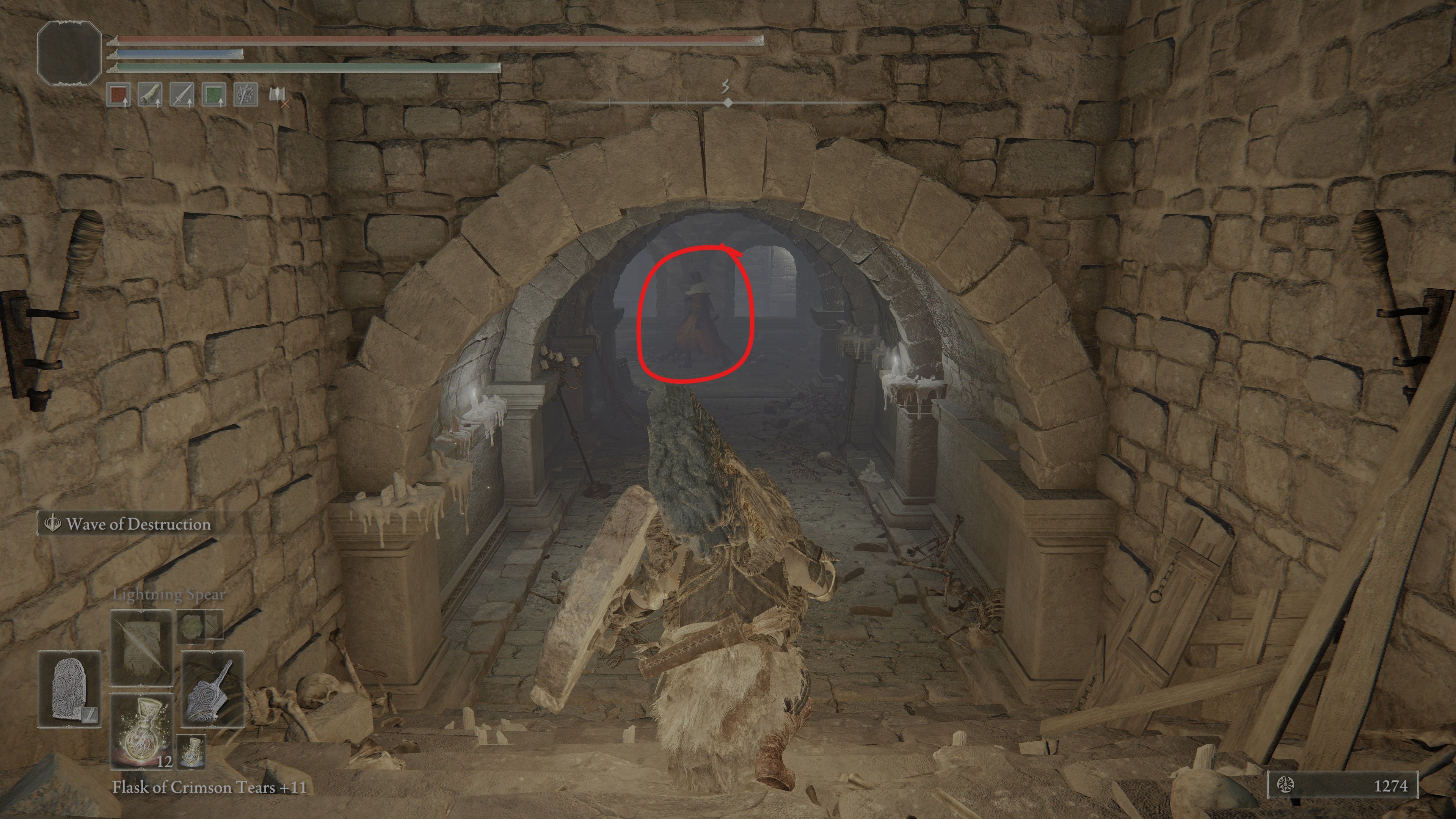 Kill the Fire Monk, and turn right. You'll see two archways, the one on the right has some pottery in front of it, but the one on the left (closest to the windows) is an illusory wall. 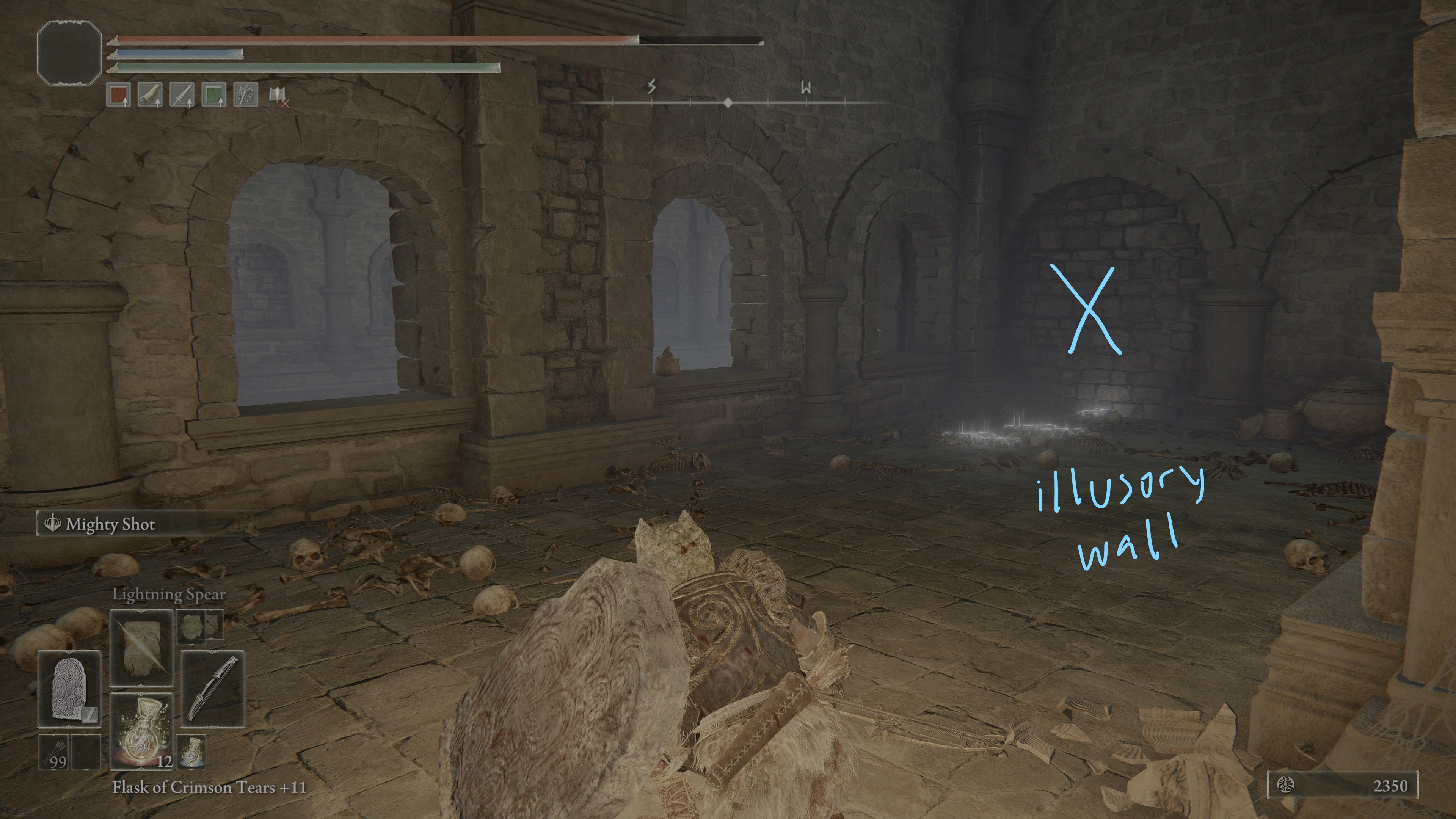 Opening the illusory wall reveals a long corridor. Proceed to the end of it, picking up a Golden Rune [11] about 3/4 of the way through, and when you reach the end, turn left and jump out of the window. 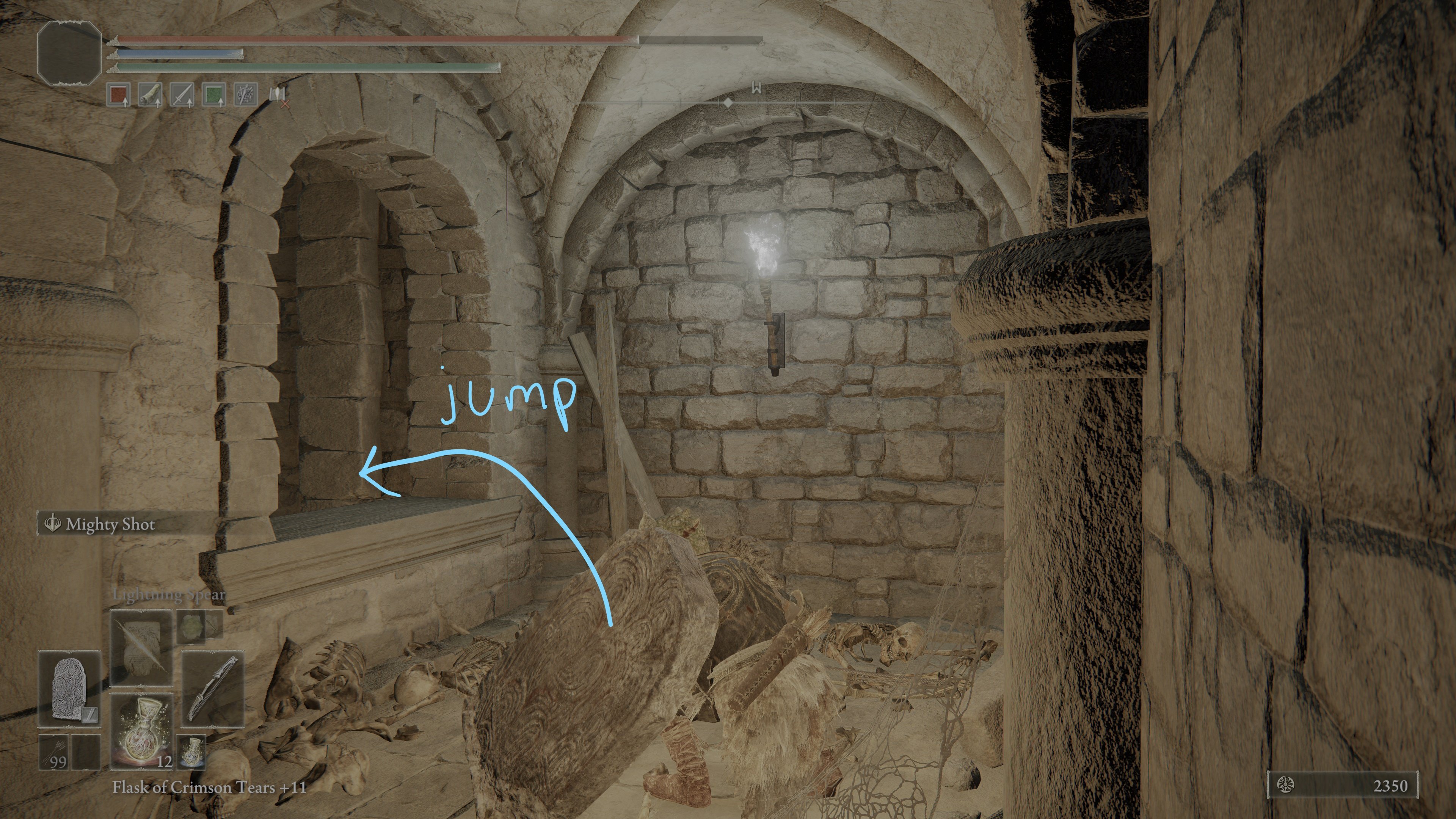 When you land, turn left. You'll see the floor seal discussed earlier in front of you, and on your right will be a small archway to walk through. 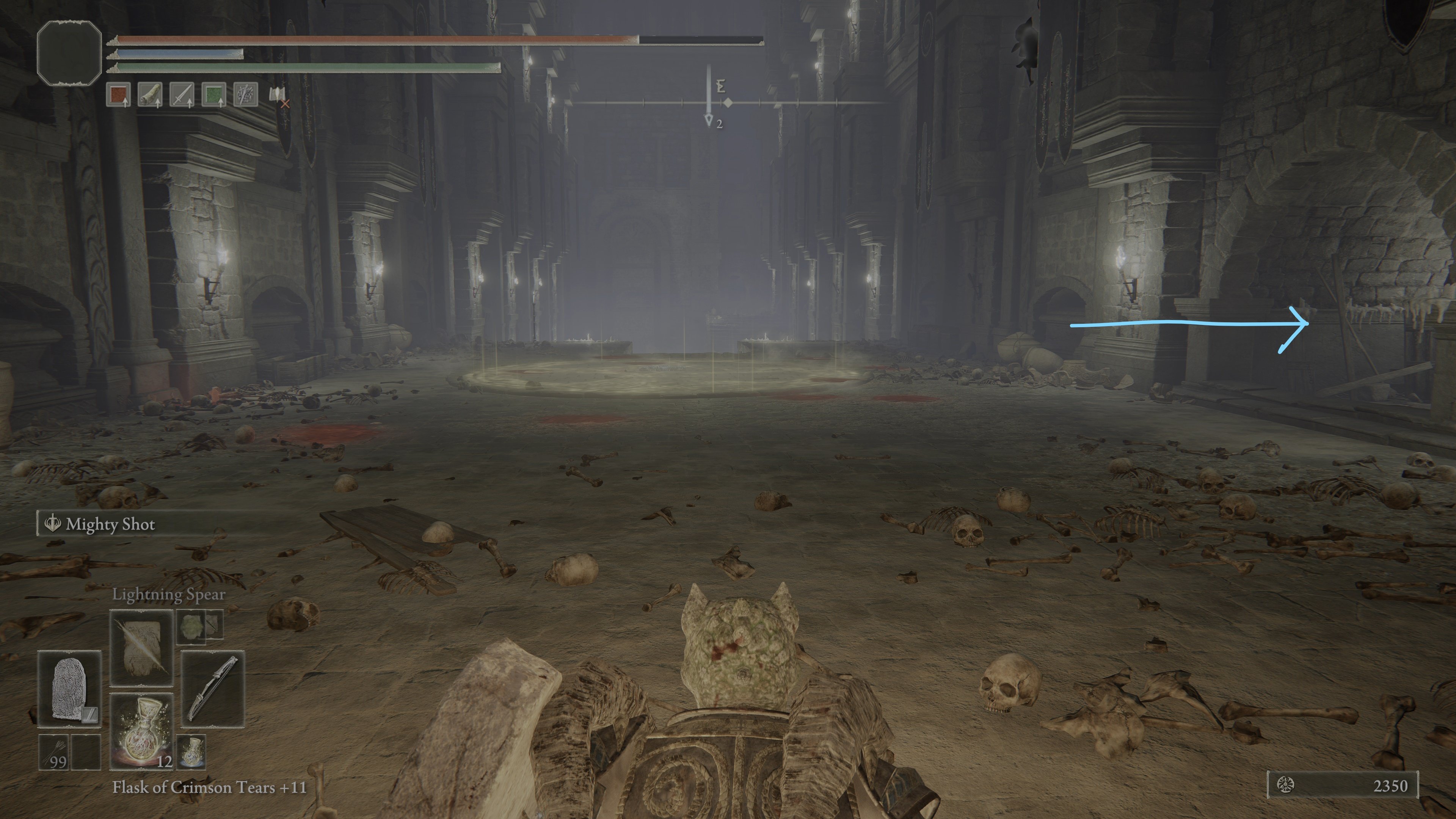 Enter it, but note that the perpendicular corridor will have a trap statue in it that spews flame. 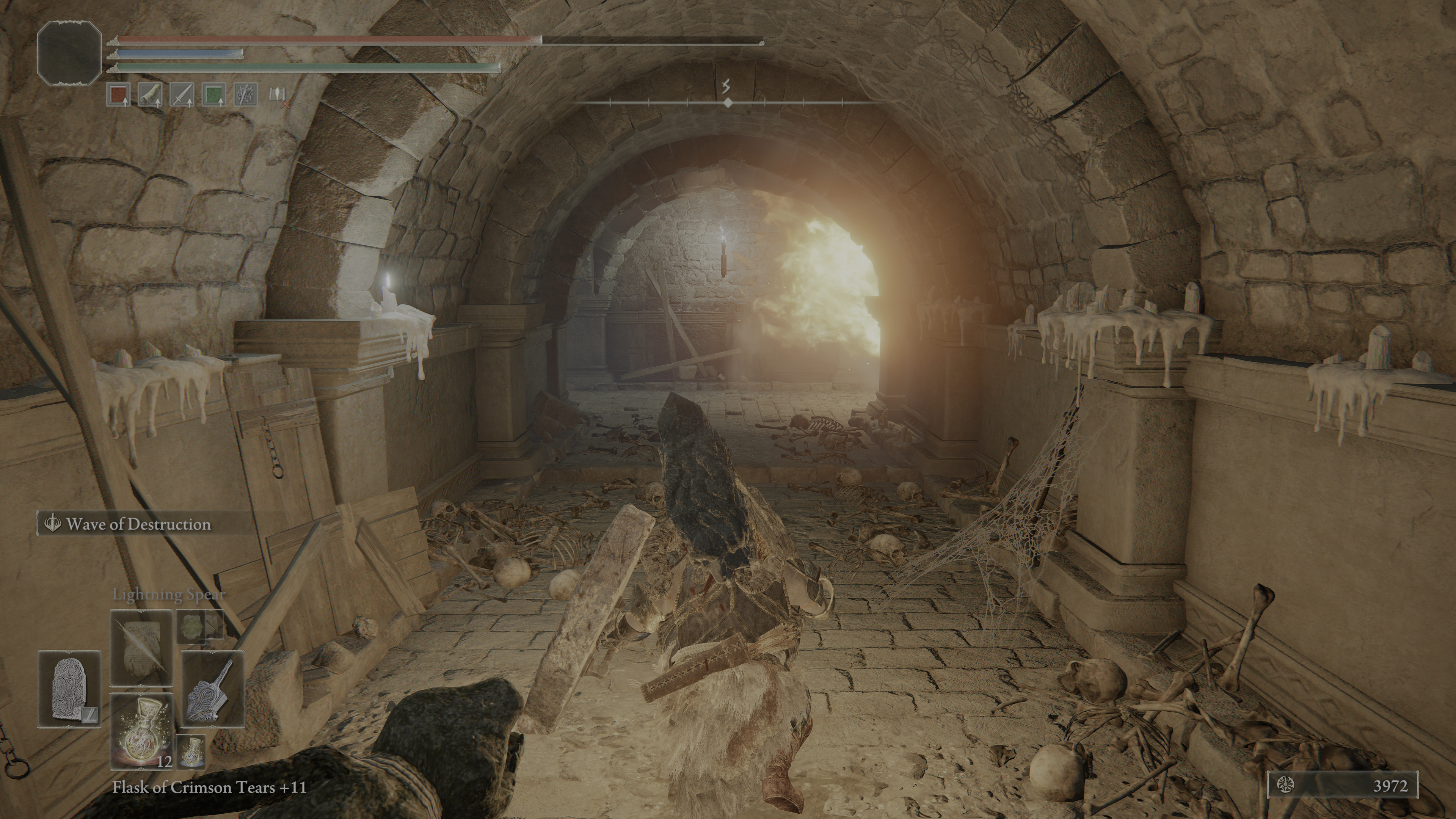 The statue spewing the flame is too far to reach from here, but what you can do is quickly run straight, then turn right, then turn again (basically making a U-shape) into a small alcove to take cover from the flame. A Fire Monk will be waiting in this alcove for you.

This alcove is close enough that you can then time your run to make it to the statue and hit it before the next flame cycle. 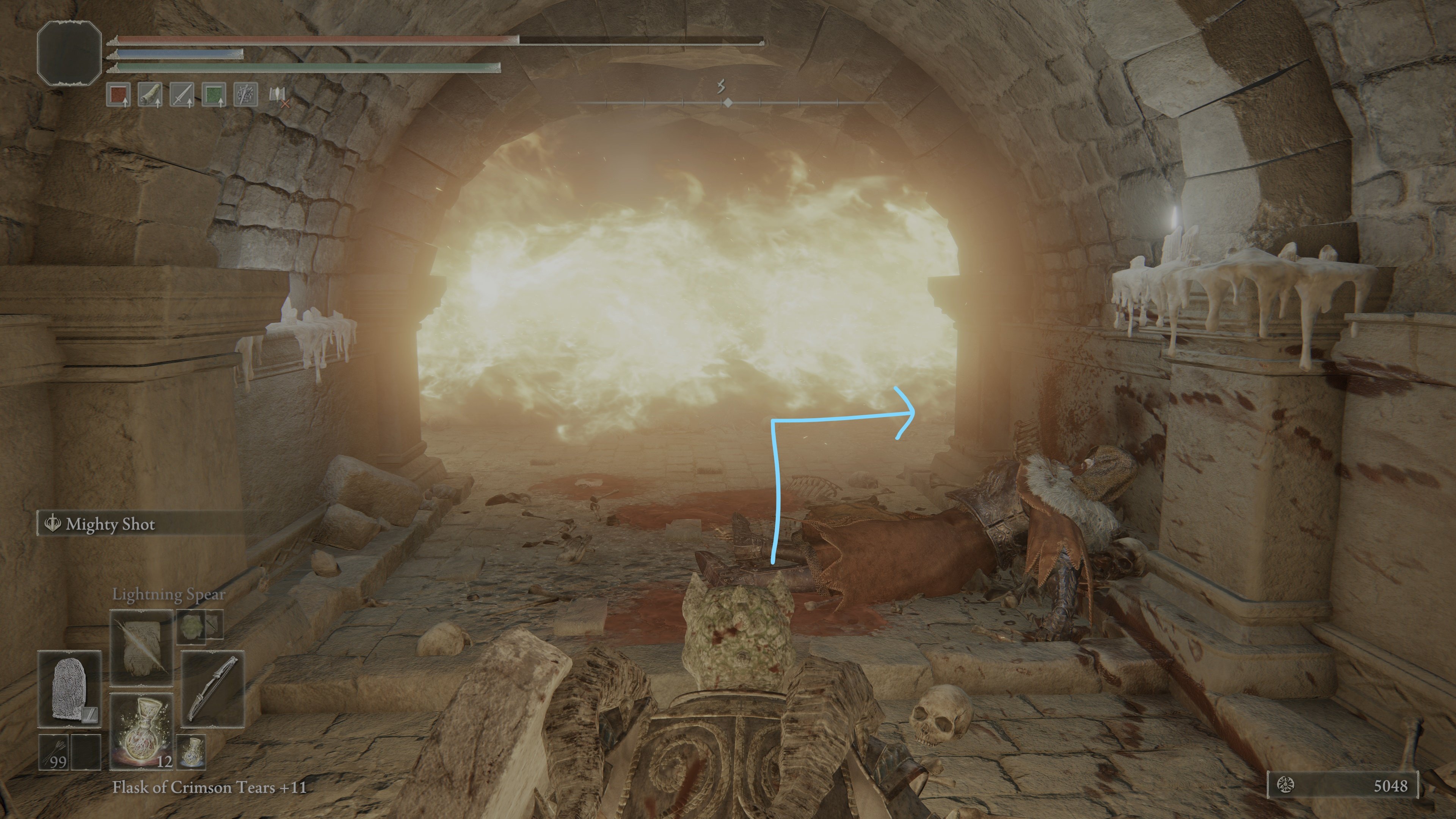 After turning off the flame-sprinkler, proceed up the stairs on your left. 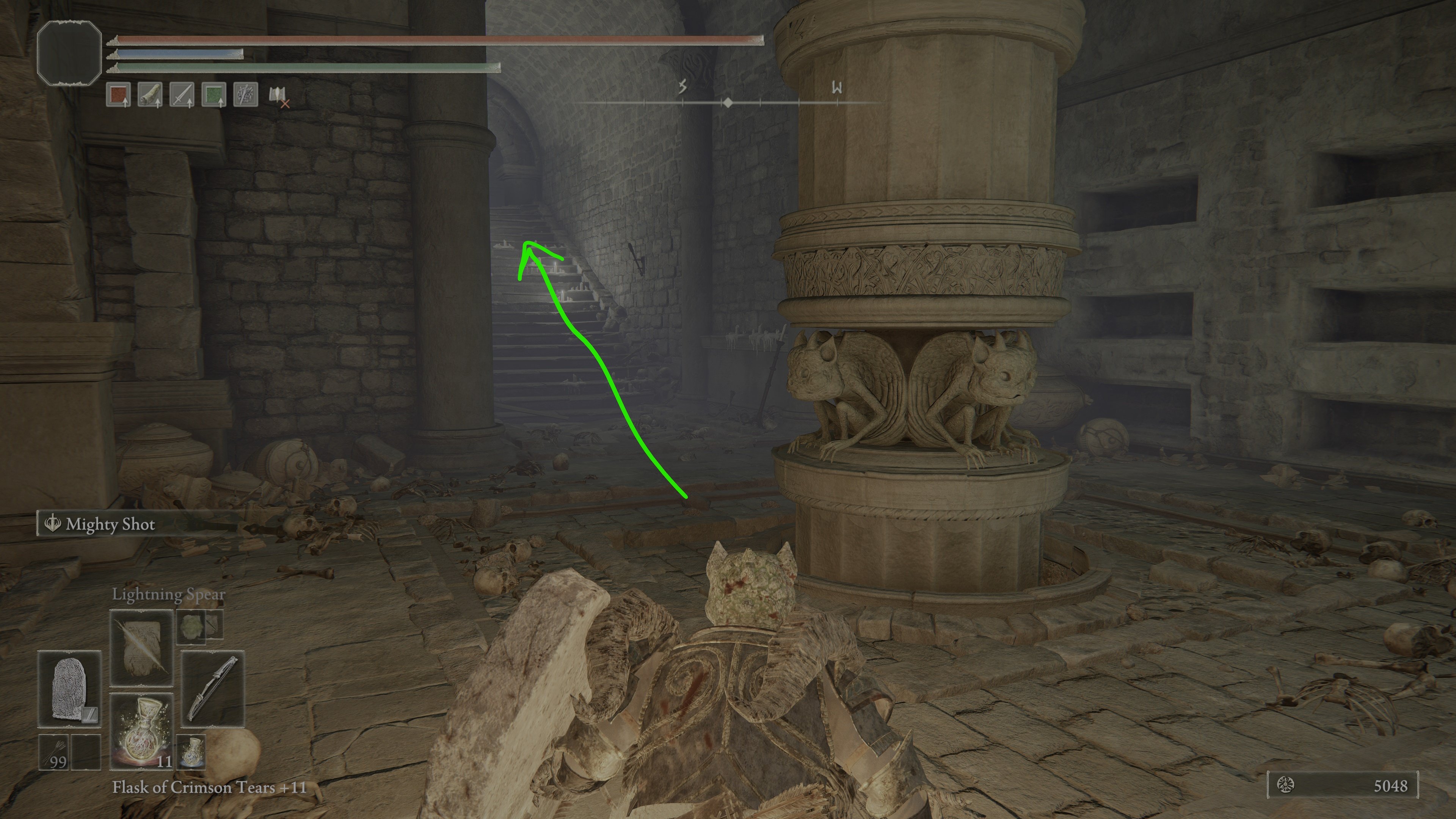 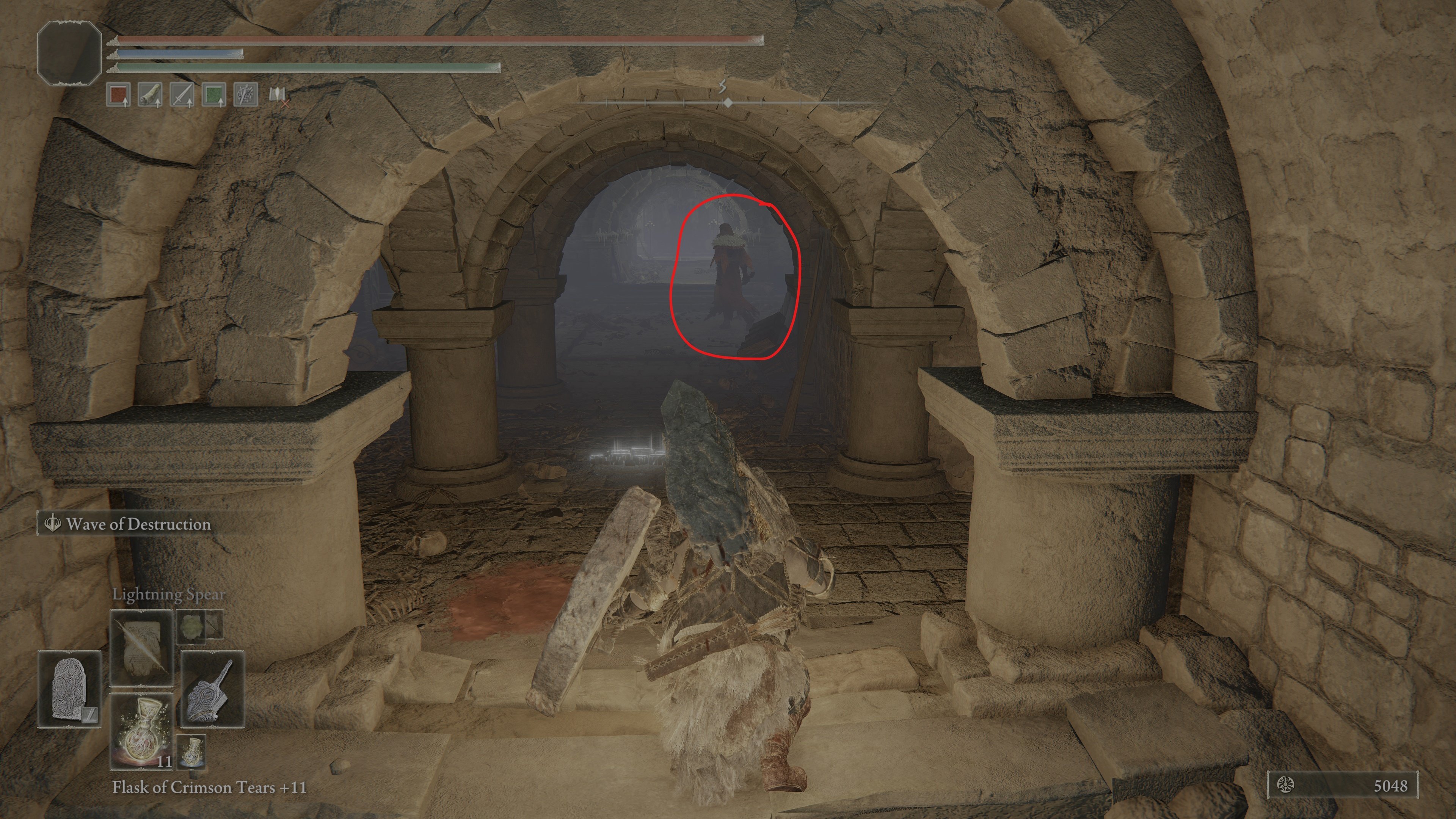 Around where the Flame Monk was standing is a set of stairs on your right, which lead in the direction opposite of you. Take these stairs up, and you'll find another room guarded by a Stonesword Key Imp statue. Regardless of whether or not you choose to enter, make sure to grab the Freezing Grease hanging off the ledge. 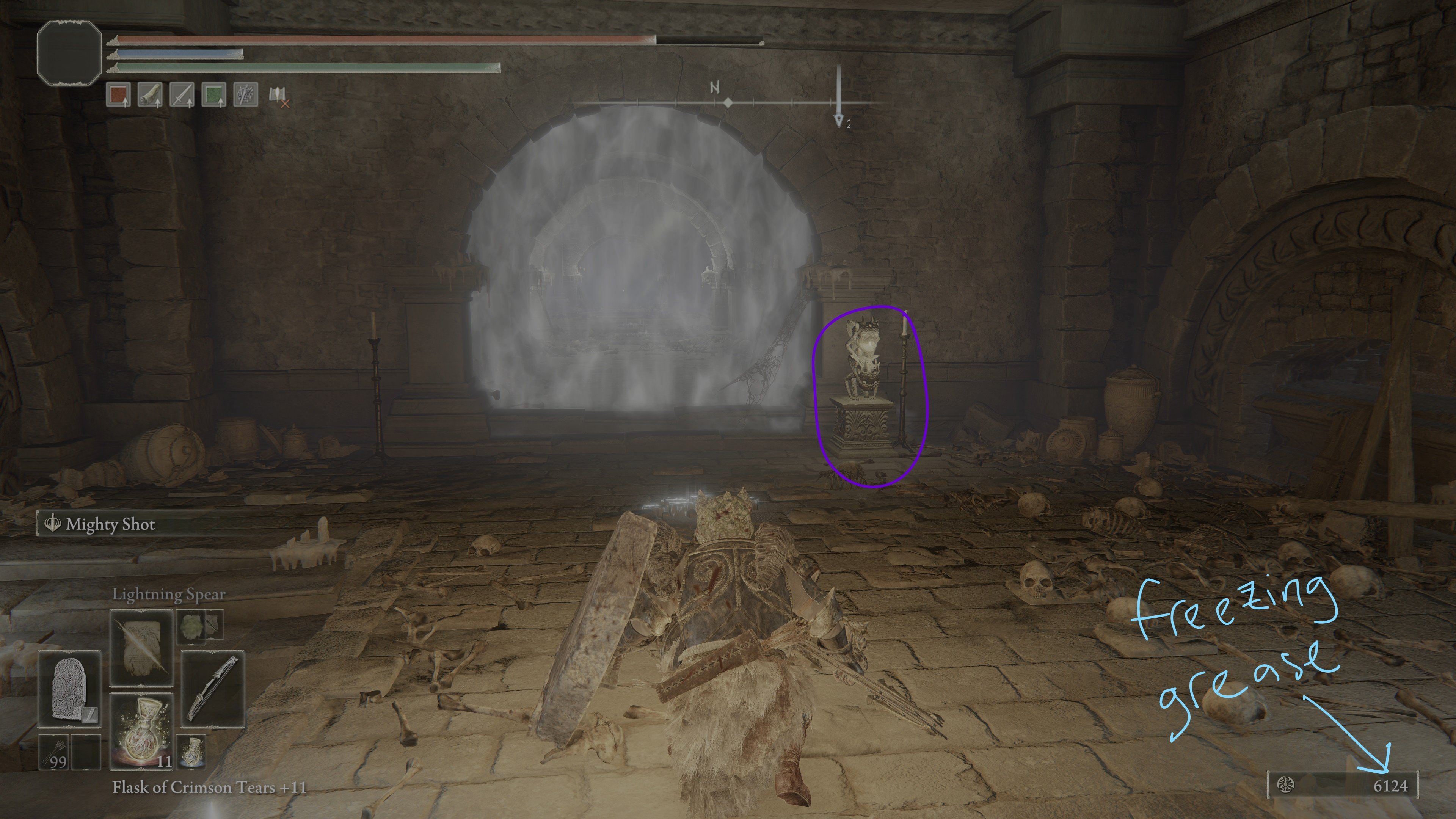 (Looking through the door, you can see some loot at the very back -- this is the Cranial Vessel Candlestand warhammer.)

In the room is a deactivated floor seal. Activate it by using a ranged attack on the trap pillar near the fire monk who ambushed you (one level below), to raise it and activate the seal. Past the seal are three invulnerable Imps guarding a corpse with the Cranial Vessel Candlestand warhammer. Alternatively, if you're fast and lazy, you can simply run in, grab the loot, and run back out.

Once you're done in this room, come back out the way you came in, and proceed back down the stairs and take the lift in the room in front of you. 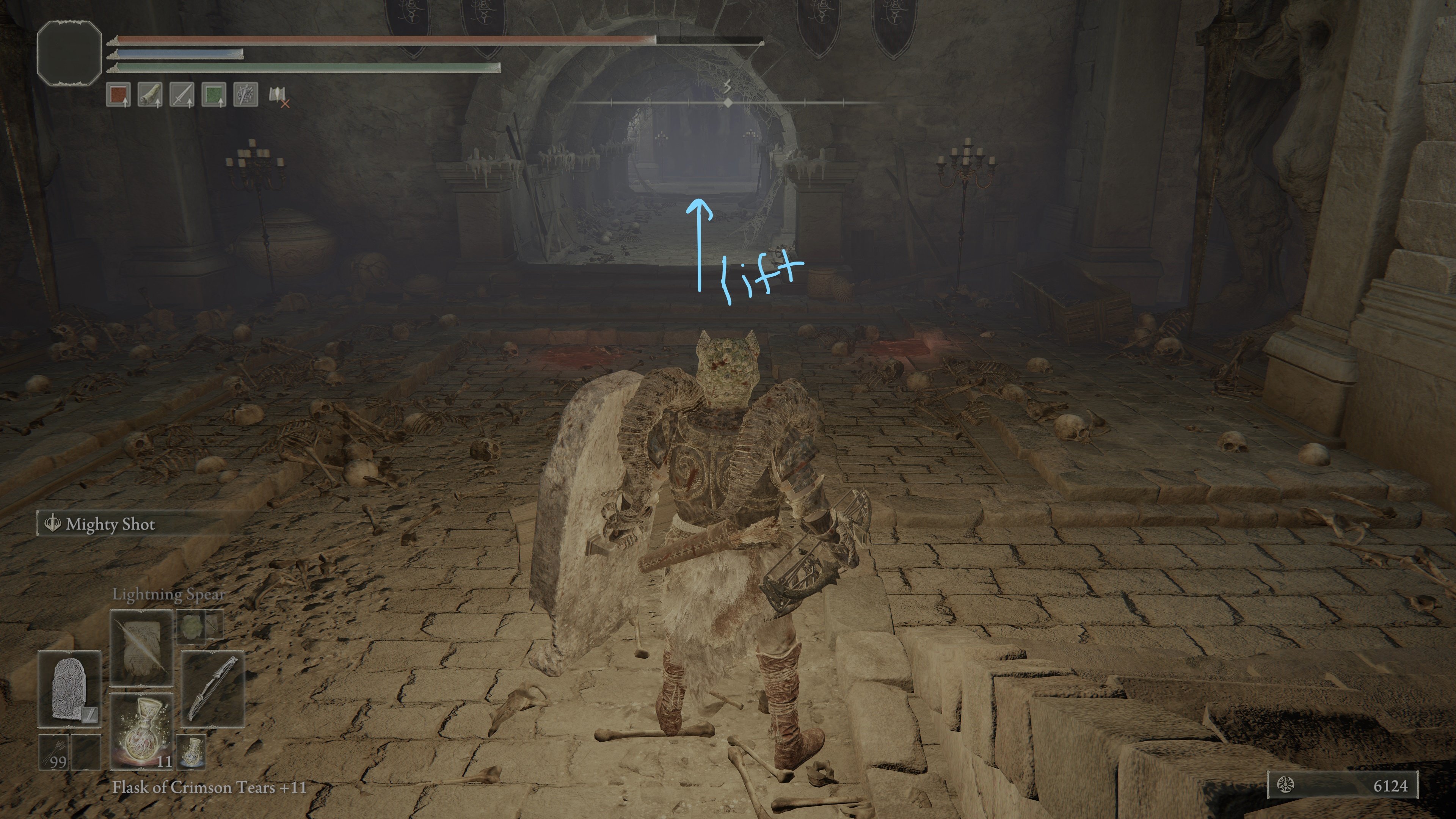 When that lift gets to the bottom, step on the button again to send it back up, but get off. This will activate the seal in front of the lift and reveal an alcove in the lift bottom (but not get into it yet). 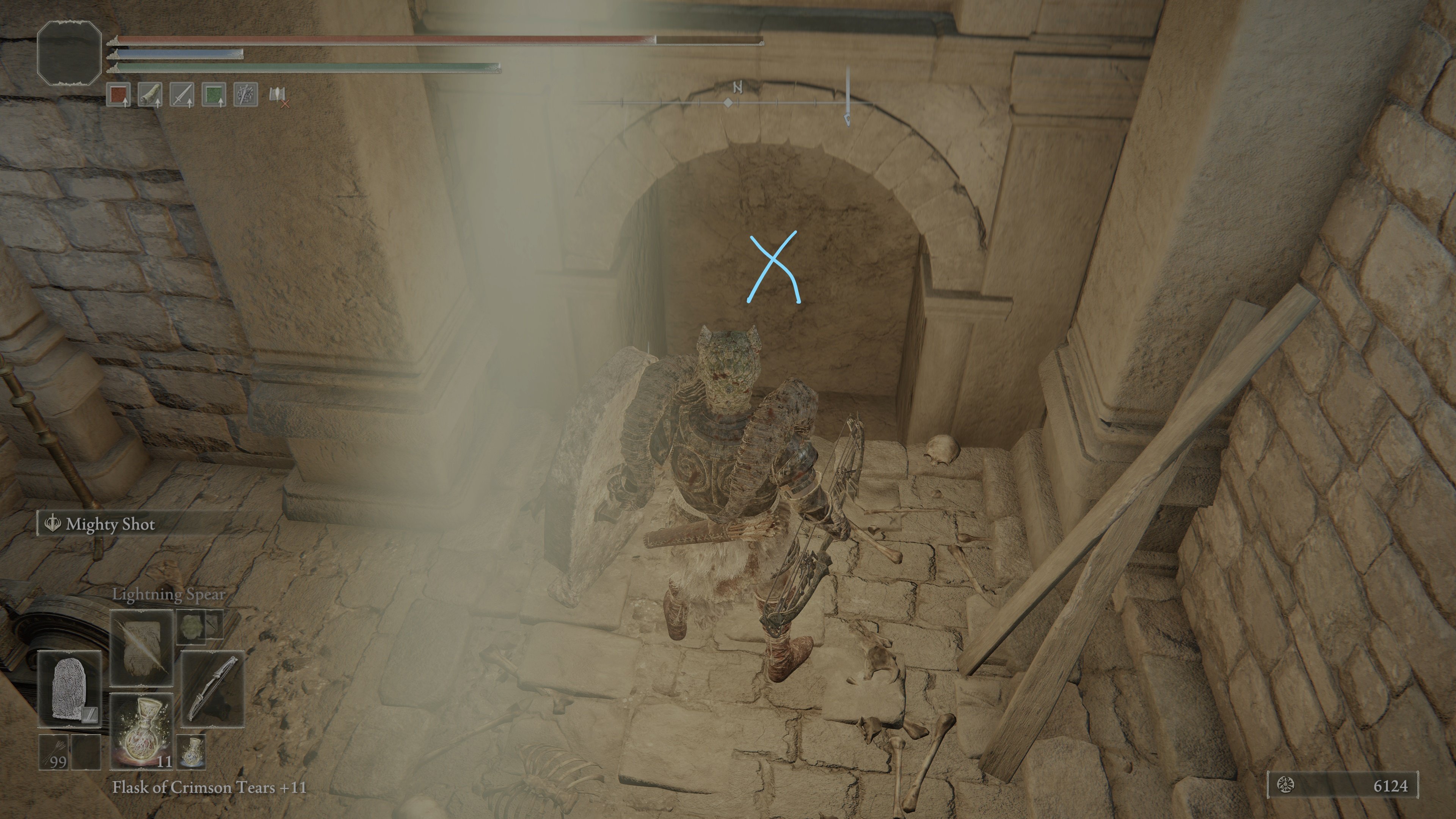 (This alcove is what you'll use to access the optional basement section later -- for now we will ignore it).

Stepping off the lift, you'll see a floor seal in front of you. 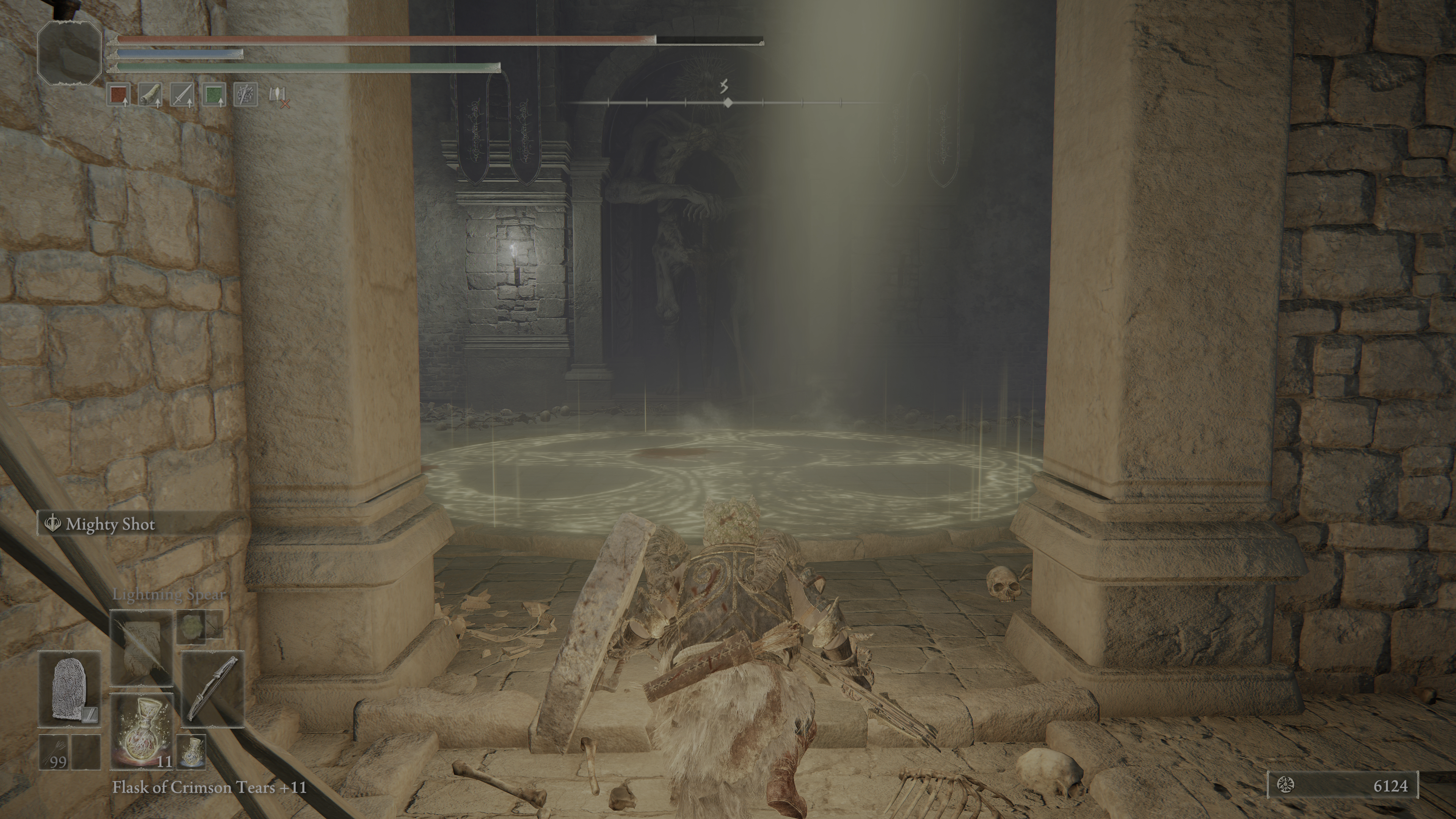 To the right will be a partially demolished staircase. Since the lower half of the stairset is missing, you can't go up it, so the only way you can go is left -- where there is a large vertical door with a lever on the right side of it. 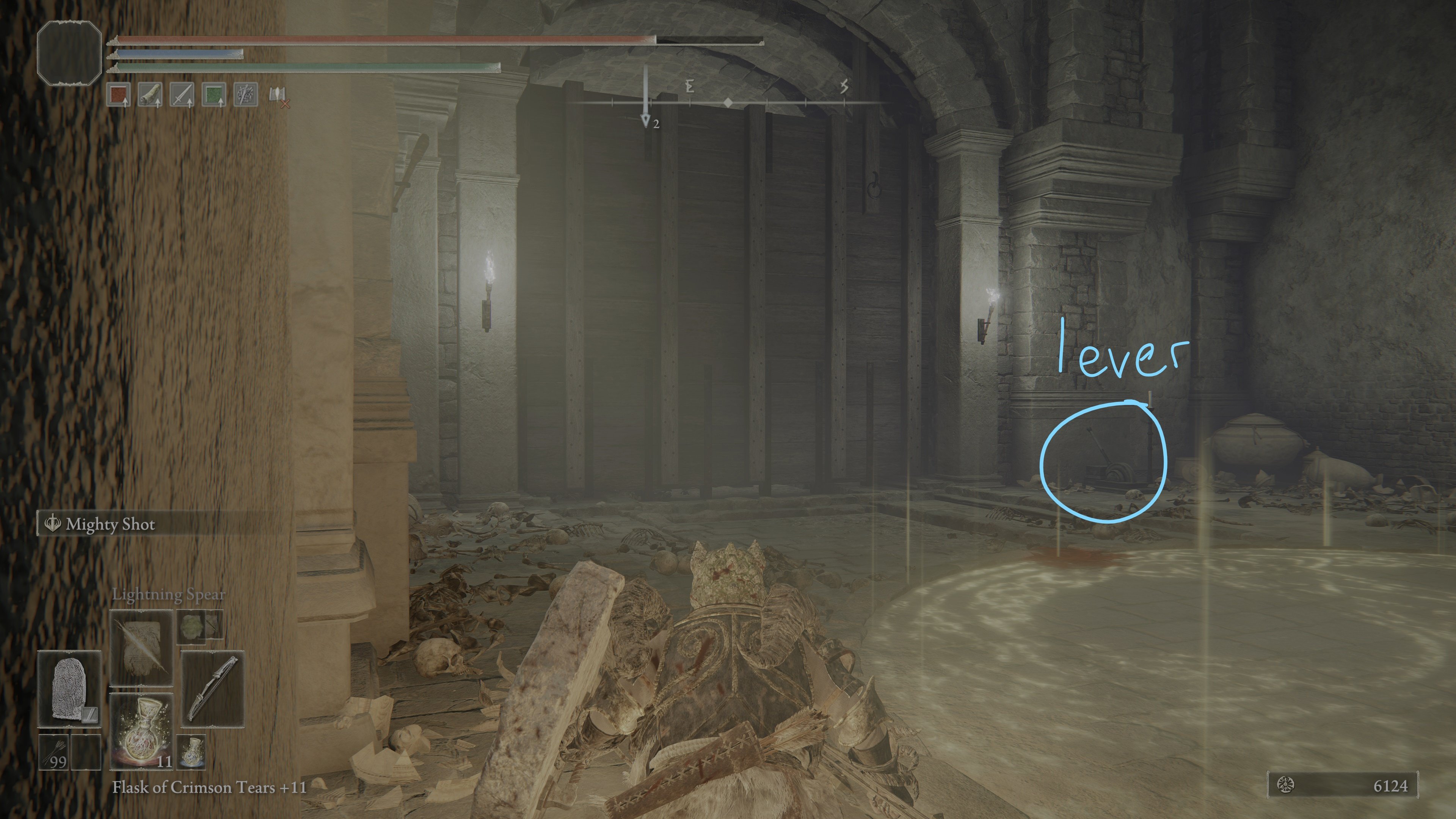 Once you open the door, you'll see a darkened Troll. 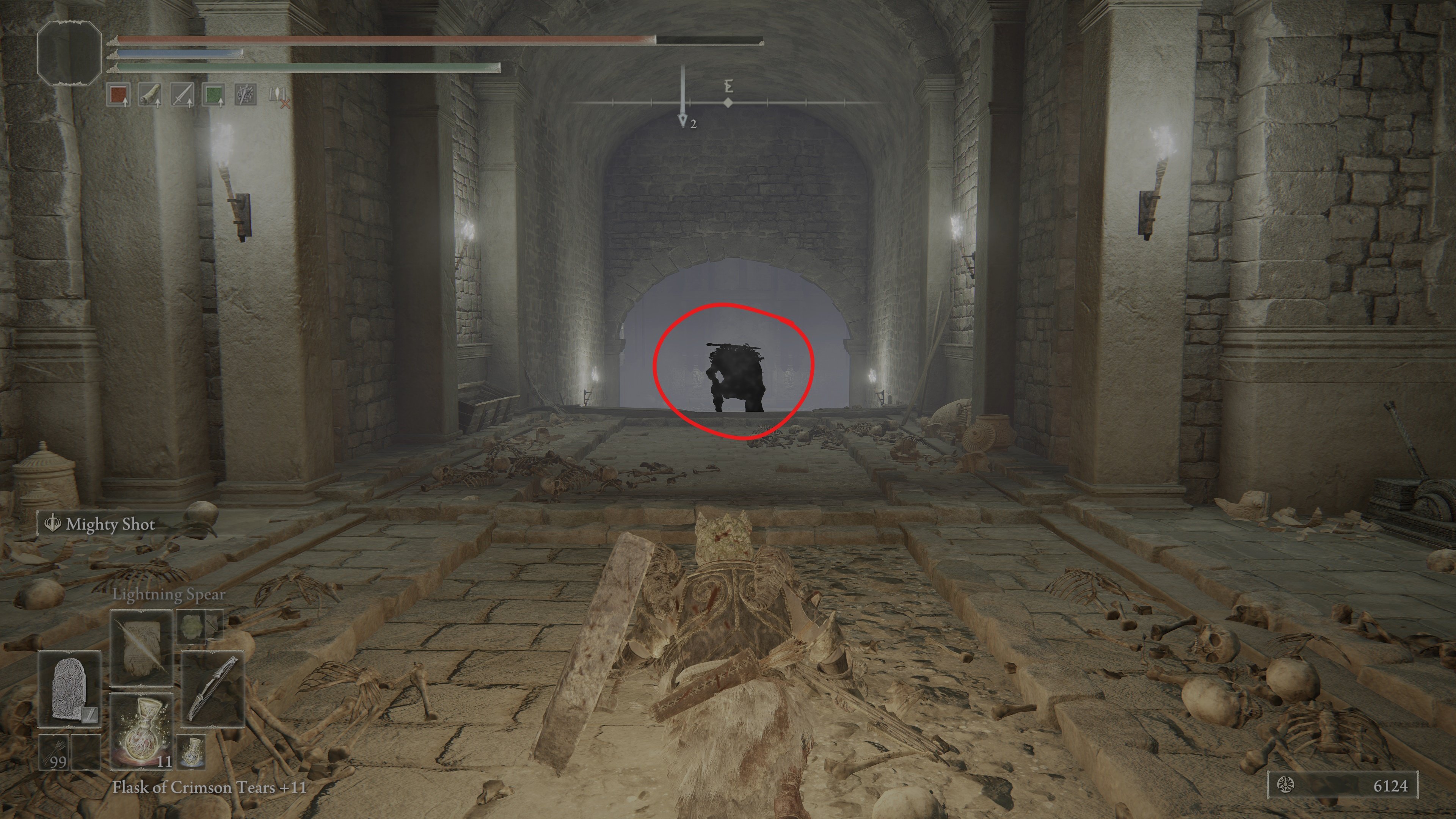 Lure the troll to the seal and fight it. Remember that since enemies in their darkened state are immune to damage, you cannot simply shoot an arrow to aggravate him, you must manually get close enough. This fight is not optional -- you must defeat the Troll to open the boss door.

After defeating the Troll, you'll get the message saying Somewhere, a heavy door has opened which lets you know that the door to the boss is now open. 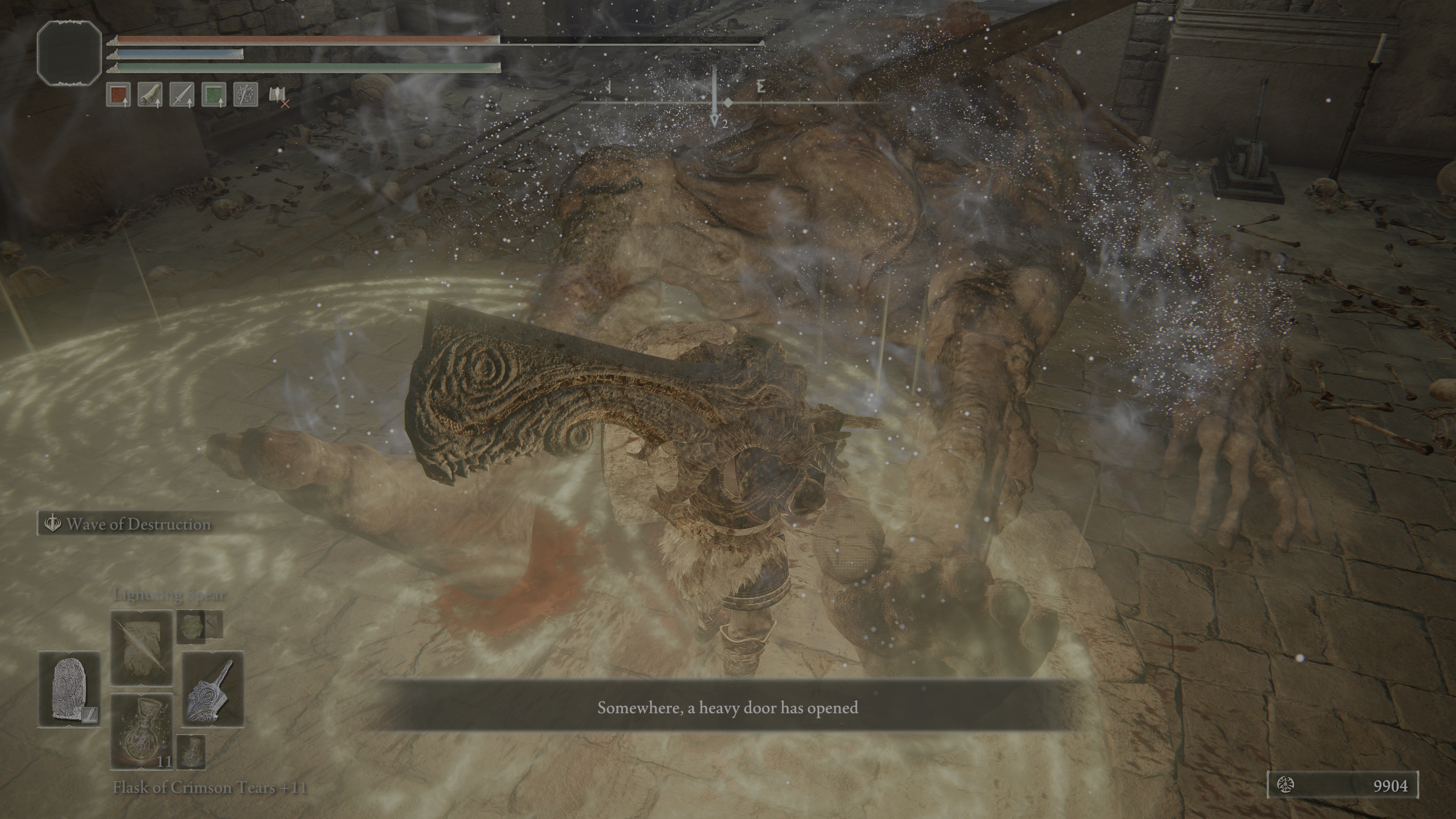 The door to the boss is just in front of where the troll you defeated was originally standing. 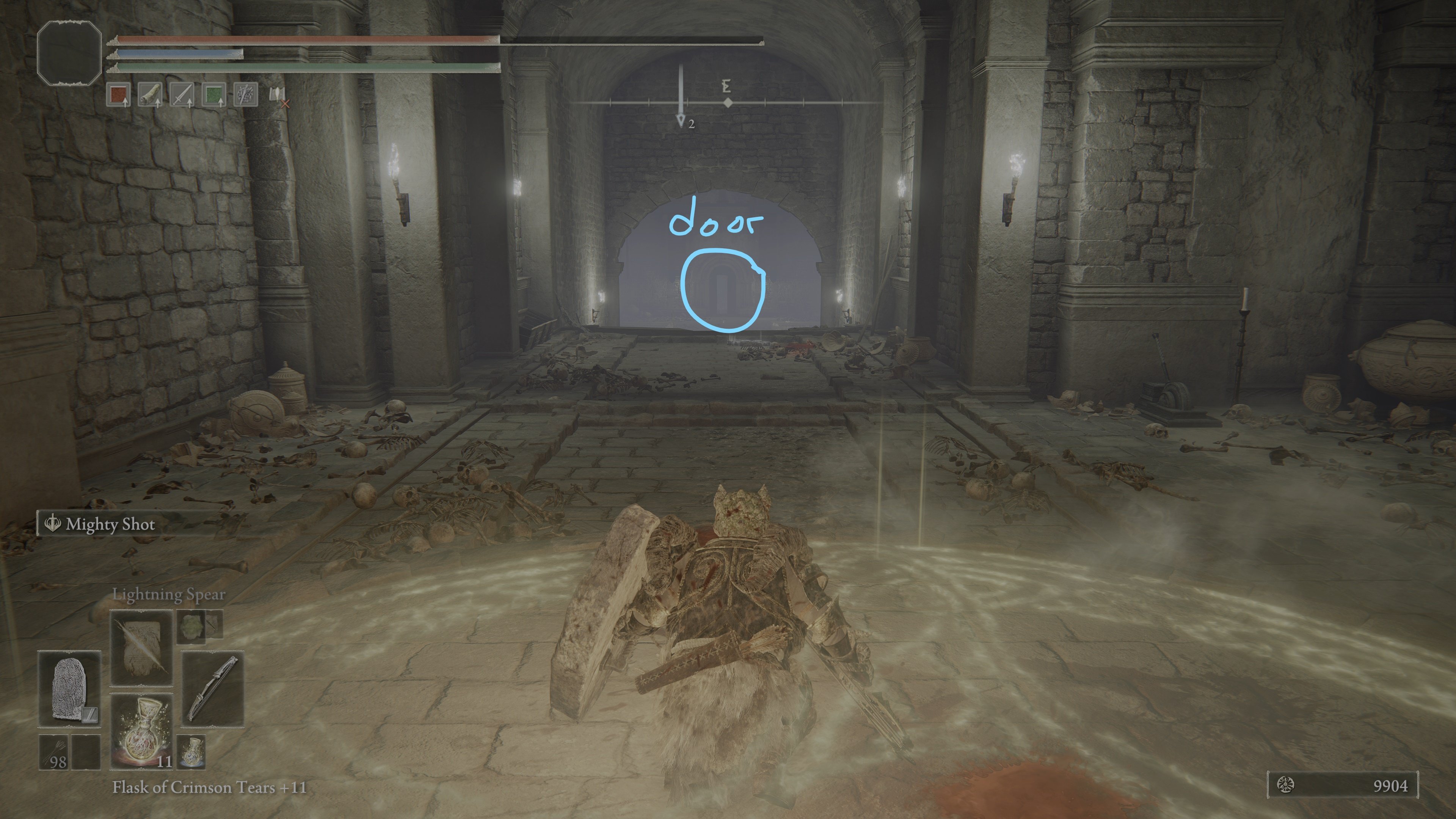 The Ancient Hero of Zamor is the boss of the dungeon. He is susceptible to bleed, and is slow moving. A spirit summon is allowed in this boss fight. Defeating him yields the Zamor Curved Sword and the entire Zamor Armor Set.

The basement section is optional. Before you go down go back to the elevator and activate it with the lever, in order to go down moving the seal statue to the basement (otherwise you won't be able to fight the two Watchdogs). Now you have three options to go to the basement:

The Prelate is guarding a Great Grave Glovewort, and the Giant's Seal.

The two Lesser Burial Watchdogs are also invulnerable and can only be fought if you lowered the elevator (see above). The elevator and the seal is behind the watchdog on the right (when you enter the hallway from the Prelate). Note: You do not have to kill them. If you choose to, they can be baited into striking each other for massive damage. You can also run past both of them and quickly take the ladder back up.

To go back up, use the ladder besides one of the watchdogs (the one at the end of the hallway). You will end up above the broken stairs.