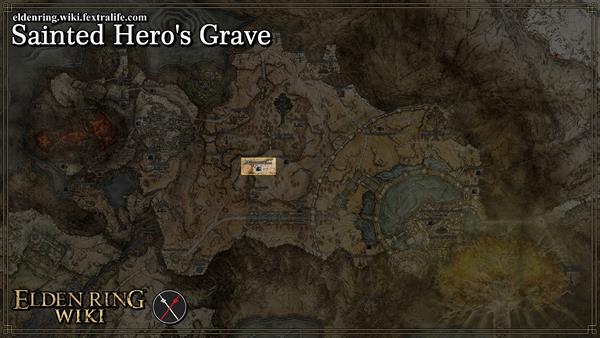 All NPCs and Merchants in Sainted Hero's Grave

Once you arrive at the entrance of the Sainted Hero's Grave, you will find a Black Knife Assassin waiting for you. She drops the Black Knife once defeated.

Down the lift is a Site of Grace and a fog gate that requires a Stonesword Key to open. Through the door is a Wraith Caller guarding the Crimson Seed Talisman. Head back to the main room once you've dealt with this one.

To the East is an exit.  On the ground a half-buried tablet shows the message "Shadow bathes in light and knows weakness."  Continue down a staircase leading down.  The second right/South exit takes you to a room, where two Wraith Callers perch at the top of a set of stairs.  A Revenant spawns out of the ground in the space under where the Wraith Callers are. There is a Ghost Glovewort [4] near its back wall.

At the top of the stairs behind a Grave Violet is an illusionary wall that reveals a ledge above a large hall below. 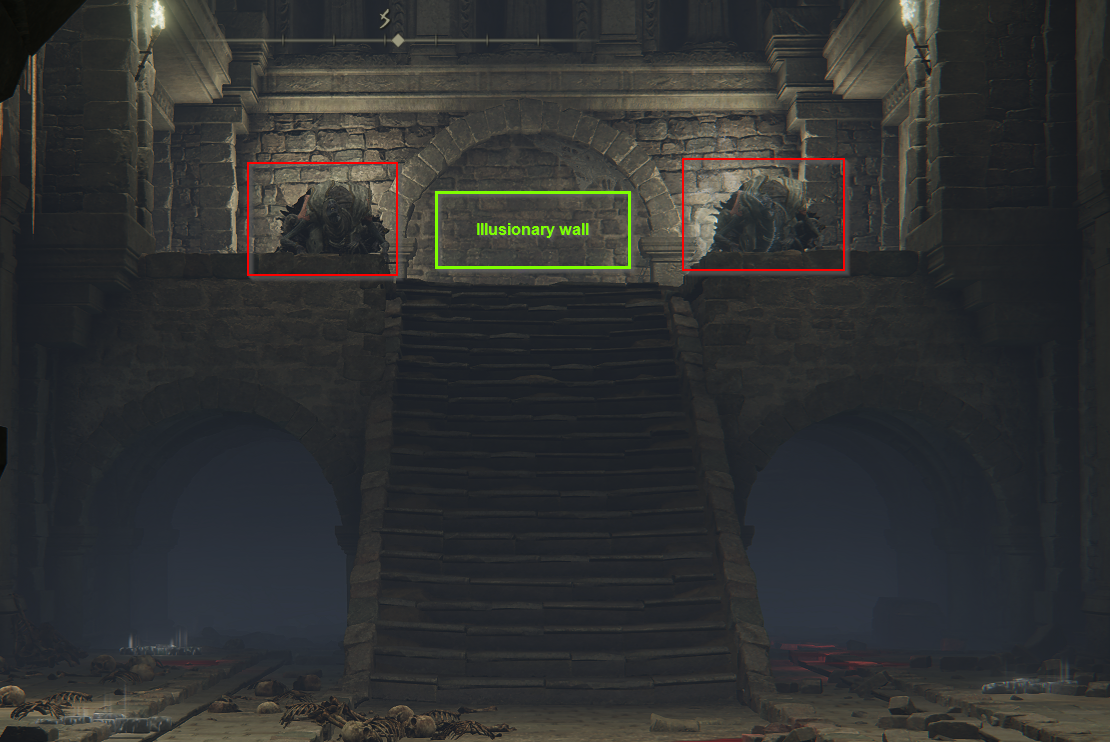 The hallway area is also accessible by taking the first right/East exit you passed earlier.  Two imps, one covered in darkness and a second standing in a light circle can be seen from the ledge. 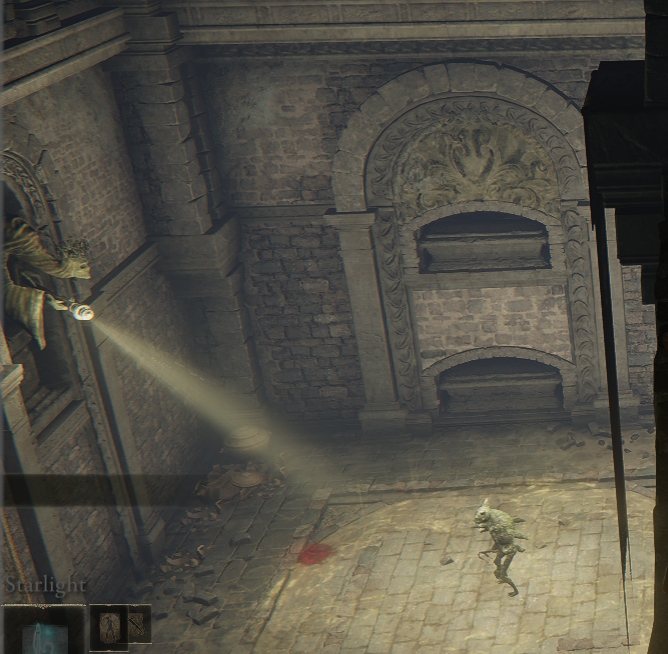 This is your first hint regarding this dungeon's mechanic - you have to lead the dark covered imps (and any other 'dark' enemies) into the light to be able to damage them.  They will be staggered upon walking into it.

The hallway takes a turn and down some steps you come to a room with two Shadow imps and a Wraith Caller under the stairs. The light circle is down the steps to the right. 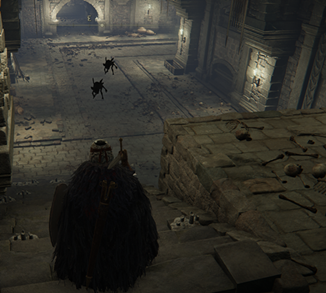 A Grave Violet and a Grave Glovewort [4] can be found in the space under the entry to the room.

Take the Southern exit down some stairs to the next room.  You'll notice the floor in the midst of a set of columns is sandy and has a depression in the middle that would collapse when you walk forward.  Instead, walk around the outer edge of the room to the opposite corner to grab the Leyndell Soldier Ashes from the corpse. 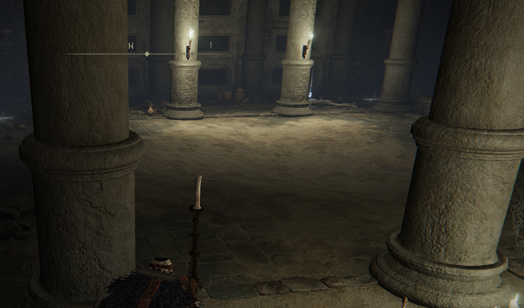 With no other path forward, you must walk to the center of the room and trigger the floor collapse. 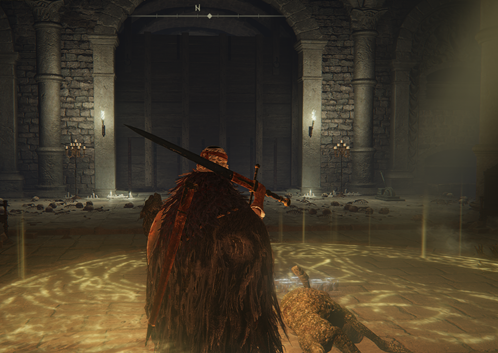 You'll fall into a circle of light, surrounded by four shadow imps. Once you have fought them off,  there is a Grave Glovewort [3] in the alcove South of the light circle as you stand facing the wooden gate.  Pull the lever next to the gate to the North. The large wooden gate opens in front of you.

Down the stairs on the other side of the gate are three Rotting Corpses and three active Guillotine traps.  Note that further down the hall on a bridge on the second level are two more Rotting Corpses that are going to drop down as you walk below the bridge.  An additional four Rotting Corpses stood at the far end of the hall where it takes a turn right/East. 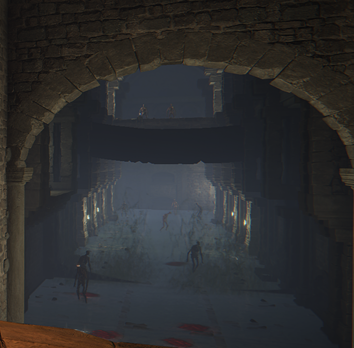 If you get on the second blade and ride up you can land on a platform that leads up to a staircase with four Rotting Corpses. Continue through to a room, where are five Rotting Corpses around the bottom of the steps as well as two Wraith Callers at the top of the steps. 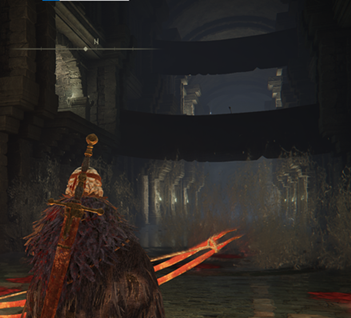 It leads you to a room up some steps with four Rotting Corpses. The path up the stairs behind the Wraith Callers will bring you back to the room with the collapsing floor (if you accidentally fell before collecting the Leyndell Soldier Ashes, you can go grab them now).

Under the stairs is a space blocked off by white fog that requires a Stonesword Key door to dispel.  Behind it is a Ghost Glovewort [5] and the Dragoncrest Shield Talisman +1 guarded by two more Rotting Corpses. Assuming you already have the Leyndell Soldier Ashes, return to the guillotine room. After the second trap is a Ghost Glovewort [4] followed by four additional Rotting Corpses. Two more would drop from a overhead bridge as you approach.

Around the corner will be a mounted Wraith Caller, three more Rotting corpses, and another three guillotine traps. Beyond these is the heavy double door leading to the boss. 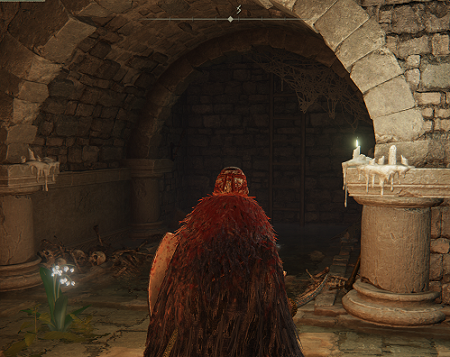 Before that, however, turn to your right/South to pick up a Grave Glovewort [3].  Climb the ladder visible in that alcove. You are now standing on ledge above a room guarded by another Revenant - see the yellow and black vapour rising from teh spot between the Grave Glovewort and the corpse. Drop down, lure it out by getting close to that spawning point and run back up the ladder to the ledge. From here, you can safely use range or the Night Maiden's Mist to kill it. Casting a healing spell while it is in range also deals damage to it.  In this room is a Human Bone Shard and a Grave Glovewort [5].  The revenant itself drops a Ghost Glovewort [4]. 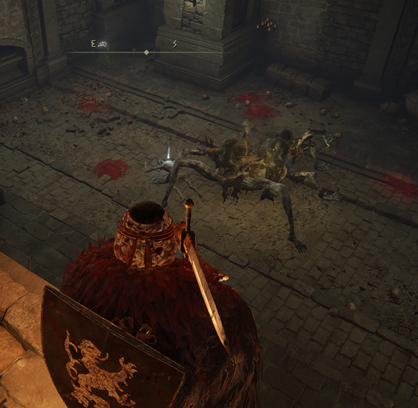 **Note:  this Revenant respawns at the same location after some time has passed even without you resetting at the Site of Grace.   It is also possible for another to spawn while one is still in place. Beware as you return to the same room during the fight with the Grave Warden Duelist or returning there to collect items.**

Take a right after you drop down, go west across the bridge above the first room with the guillotines.  A corpse there can be looted for 3x Root Resin. Continue up some steps to a long room.  A little way ahead is a coprse with the Prattling Pate (Let's get to it).  A shadow Grave Warden Duelist stands at the far end guarding a Ghost Glovewort [4] and Ghost Glovewort [5]. 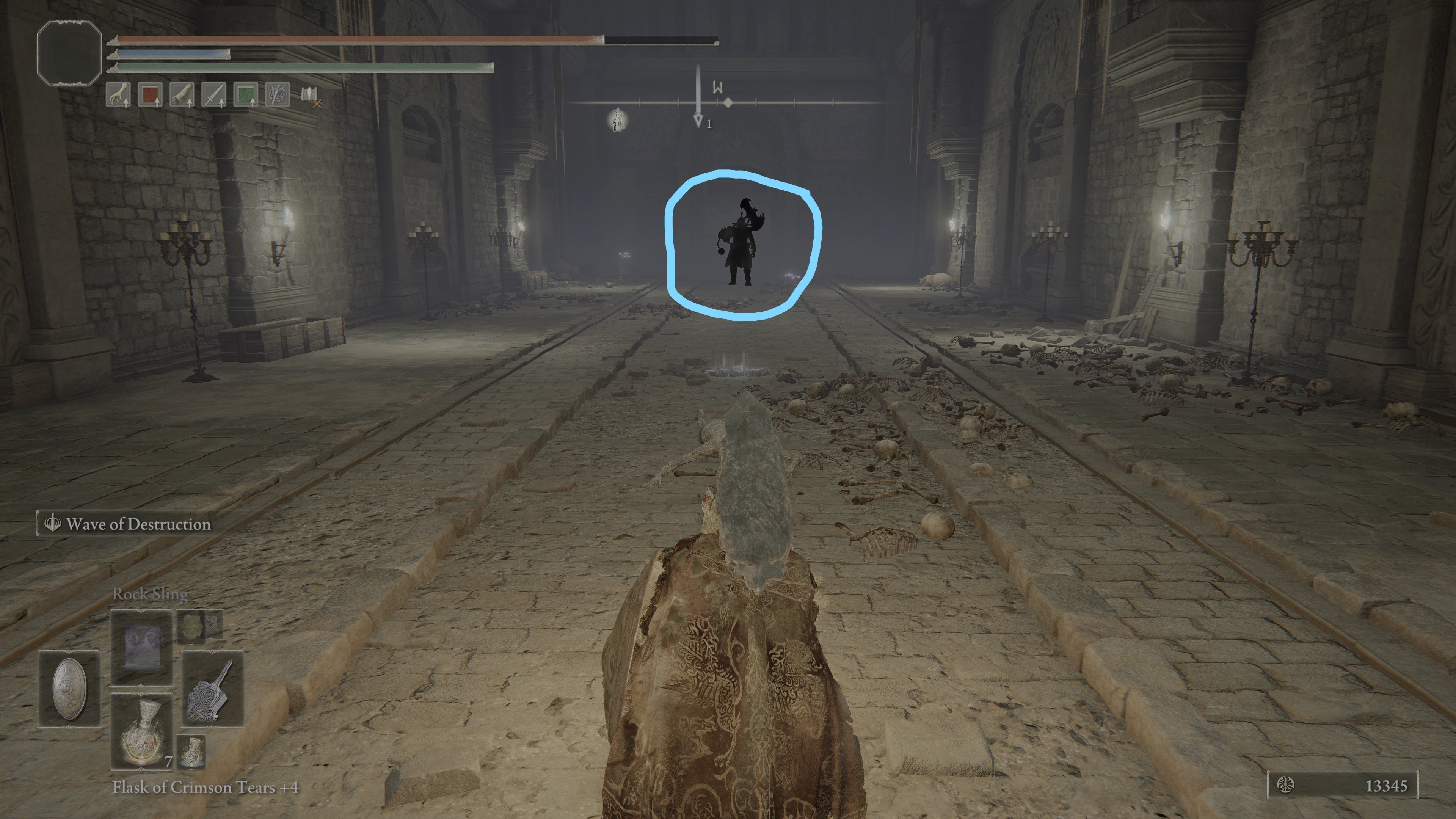 You must draw him out and back to the light circle, the closest one being the one you dropped onto through the broken floor.  Defeating him is required to unlock the heavy door leading to the boss. You have to be in melee range to bait his attack to make him step forward, otherwise he will retreat back down the steps leading to the illuminated circle of light.  Alternatively, equip the Shabriri's Woe talisman to easily draw his aggro and have him step into the light. 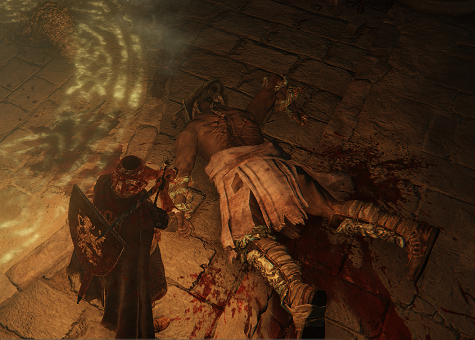 Go back past the guillotines and to the now open door - head down the stairs.  To your right is a final Rotting Corpse and a Grave Glovewort [3]. 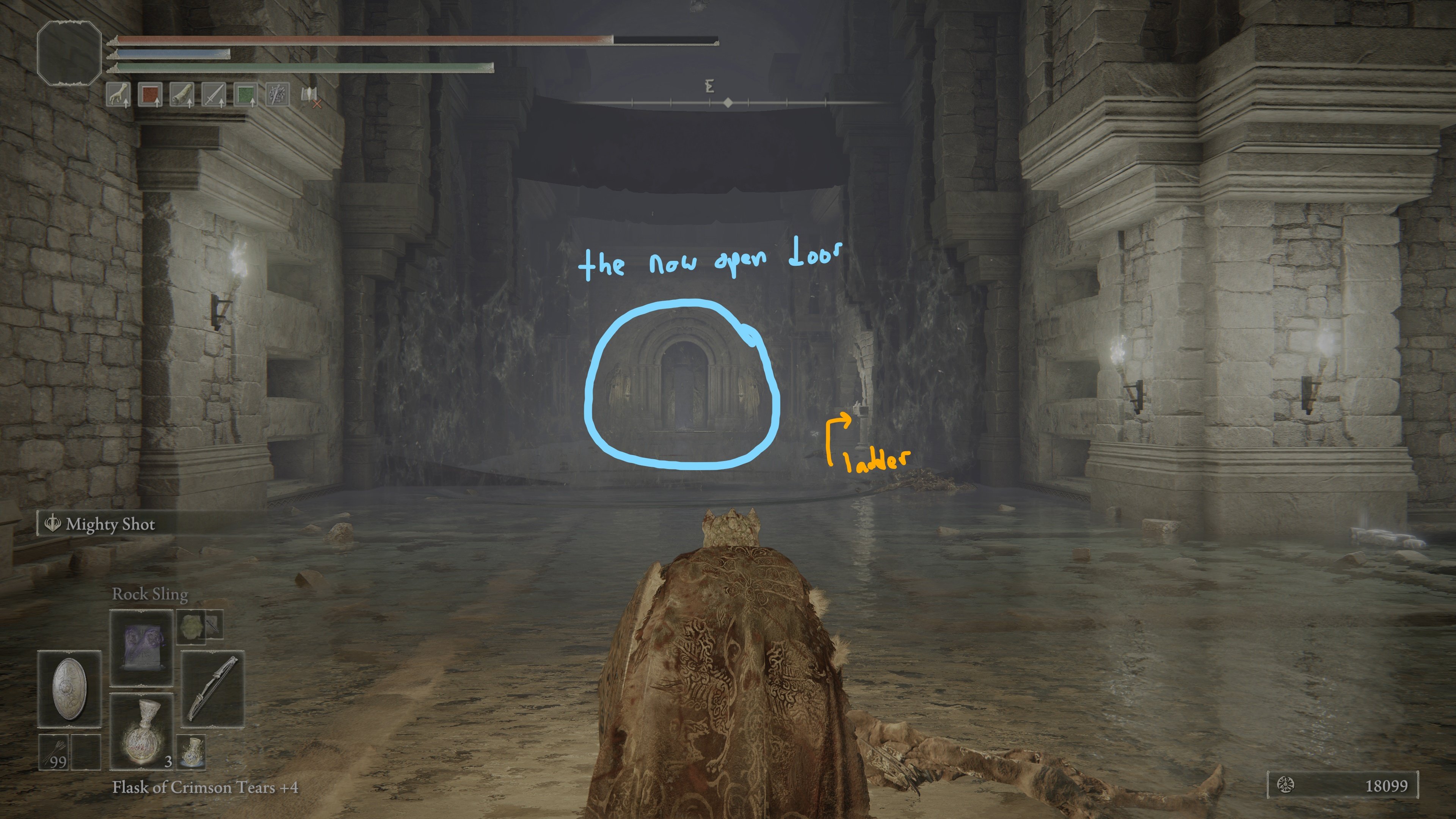 Finally, enter the Boss room and you will fight the Ancient Hero of Zamor. The boss drops the Ancient Dragon Knight Kristoff Ashes. After the fight you can collect 2x Root Resins in the back corners of the room. Well done!

You need two stone sword keys to get all items in this dungeon.